What Happened At OPM?

I want to discuss some elements of the OPM breach and what we know and what we don’t. Before I do, I want to acknowledge the tremendous and justified distress that those who’ve filled out the SF-86 form are experiencing. I also want to acknowledge the tremendous concern that those who employ those with clearances must be feeling. The form is designed as an (inverted) roadmap to suborning people, and now all that data is in the hands of a foreign intelligence service.

The National Journal published A Timeline of Government Data Breaches: 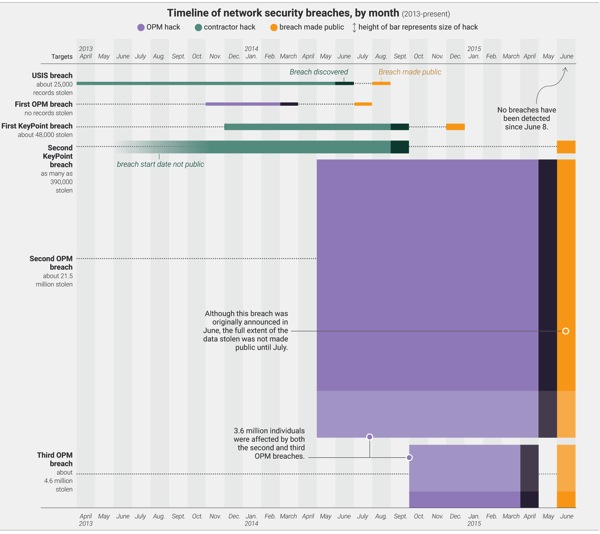 I asked after the root cause, and Rich Bejtlich responded “The root cause is a focus on locking doors and windows while intruders are still in the house” with a pointer to his “Continuous Diagnostic Monitoring Does Not Detect Hackers.”

And while I agree with Richard’s point in that post, I don’t think that’s the root cause. When I think about root cause, I think about approaches like Five Whys or Ishikawa. If we apply this sort of approach then we can ask, “Why were foreigners able to download the OPM database?” There are numerous paths that we might take, for example:

Alternately, we might go down a variety of paths based on the Inspector General Report. We might consider Richard’s point:

But we can go down alternate paths:

What I’d really like to see are specific technical facts laid out. (Or heck, if the facts are unknowable because logs rotated or attackers deleted them, or we don’t even know why we can’t know, let’s talk about that, and learn from it.)

OPM and Katherine Archuleta have already been penalized. Let’s learn things beyond dates. Let’s put the facts out there, or, as I quoted in my last post we “should declare the causes which impel them to the separation”, or “let Facts be submitted to a candid world.” Once we have facts about the causes, we can perform deeper root cause analysis.

A collection of public facts would enable us to have a discussion about those possibilities. We could have a meta-conversation about those categorizations of failings, and if there’s other ones which make more sense.

Alternately, we can keep going the way we’re going.

So. What happened at OPM?