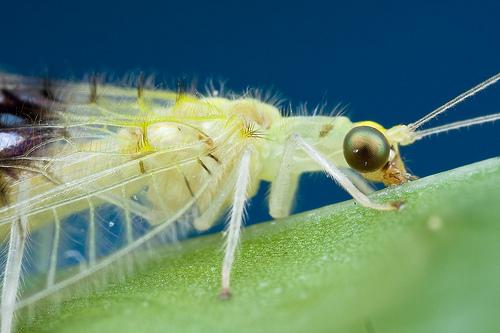 There’s a very cool story on NPR about “A New Species Discovered … On Flickr“. A entomologist was looking at some photos, and saw a bug he’d never seen. Check out the photographer’s site or Flickr pages. The paper is “A charismatic new species of green lacewing discovered in Malaysia (Neuroptera, Chrysopidae):
the confluence of citizen scientist, online image database and cybertaxonomy:”

The online images were then randomly examined by the senior author (SLW) who determined that this distinctive species was not immediately recognizable as any previously described species. Links to the images were forwarded to additional experts in chrysopid taxonomy to elicit comment on its possible taxonomic identity. After extensive discussion it was concluded that the species was likely new to science but its generic placement inconclusive based solely upon the images at hand.

I find it fascinating that the distinction of a new species is keyed on a morphological difference like this. While I know nothing about the chryopidae, and this is just a lay comment, but substantially larger variations occur in dogs without driving the claim of a new species. Does anyone know what makes for a new chryopid?