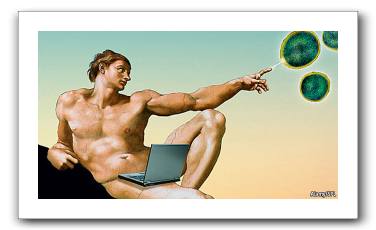 Today will be remembered along with the landing on the moon and the creation of the internet:

Researchers at the J. Craig Venter Institute (JCVI), a not-for-profit genomic research organization, published results today describing the successful construction of the first self-replicating, synthetic bacterial cell. The team synthesized the 1.08 million base pair chromosome of a modified Mycoplasma mycoides genome. The synthetic cell is called Mycoplasma mycoides JCVI-syn1.0 and is the proof of principle that genomes can be designed in the computer, chemically made in the laboratory and transplanted into a recipient cell to produce a new self-replicating cell controlled only by the synthetic genome.

Press release, or read more in Science or the Economist. (Whose image I borrowed.)