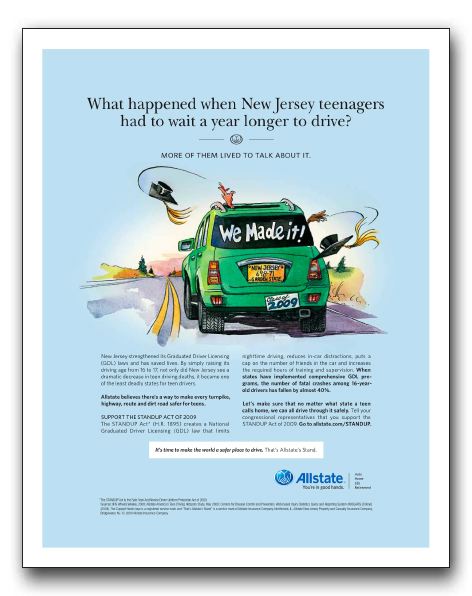 So I saw this ad on the back of the Economist. (Click for a larger PDF). In reading it, I noticed this exhortation to “support the STANDUP act of 2009:”

The STANDUP Act* (H.R. 1895) creates a National
Graduated Driver Licensing (GDL) law that [limits nighttime driving, reduces in-car distractions, puts a cap on the number of friends in the car and increases the required hours of training and supervision. ] congressional representatives When states have implemented comprehensive GDL programs, the number of fatal crashes among 16 year old drivers has fallen by almost 40%.”

Now I was curious as to how many lives that was, and so I went looking. I found a lot of interesting stuff. For example, “Beginning with Florida in 1996, graduated licensing systems also have been adopted in most U.S. states.” That’s from the “Insurance Institute for Highway Safety/Highway Loss Data Institute.” But they also tell us: “A national evaluation reported that states with 3-stage graduated systems had 11 percent fewer fatal crashes per population of 16 year-olds during 1994-2004 than states without such systems.” Last I checked, 11 is not almost 40.

It also turns out that the number of teens killed in New Jersey last year was 60. Now, I don’t want to minimize the pain for the families who lost their children, or those injured by teens driving like, well, teens. But based on Allstate’s high number, these laws about graduated driving privileges may save as many as 25 lives a year. Based on the IIHS assessment, it may be 6 or 7.

Now there’s an old saw “Where are you from? New Jersey. Oh, what exit?” The truth is that life in New Jersey is car-centric, and saving those lives involves restricting the behavior of about 110,000 teens. (Or so I estimate, based on New Jersey Quickfacts from the US Census, who say that there are 8.6MM people, and roughly 24% are under 18, and so I figure that roughly 1.3% of the population is 16.) Those teens are in the process of exploring who they are, and asserting their independence from their parents and geography. They’re in the process of growing up. Part of that growing up is taking risks, and I suspect that some of the risk taking is simply delayed, not removed.

The other thing I don’t get about Allstate’s ad is that the insurance industry says “most states” already have such laws. Setting a national law is hard, and Congress is busy investigating baseball players. So clearly, they have important tasks to be working on. What’s more, phrases like “A national evaluation reported that states with 3-stage graduated systems had 11 percent fewer fatal crashes … than states without such systems.” A stronger argument for continued experimentation by laboratories of democracy is hard to imagine.

But stepping back, the real issue I have here is the desire to drive one particular danger to zero without consideration of the costs or alternatives. These folks are dedicated to stopping deaths in cars (which is appropriate for the IIHS, less so for Allstate). But what fraction of teen deaths are in cars that a teen is driving? What are the costs of a little temporary safety for teens?

[updates: corrected quote, added link to text]
[update2: Don’t miss Kenneth Finnegan’s comment about having 5 teens all drive separately from point A to point B, with attendant environmental and parking impact.]

15 comments on "A Little Temporary Safety"