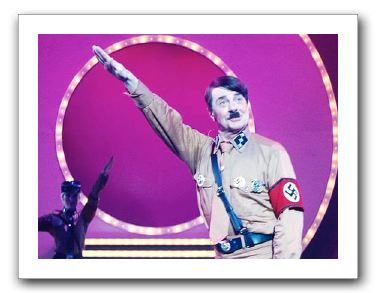 The crowd for the premiere seemed pleased. It wasn’t your typical Broadway musical audience, to judge from the number of smart-looking young people with interesting haircuts. A “lively counterpoint to Hollywood productions like ‘Valkyrie’ and ‘Defiance,’ with their impeccable Resistance heroes and clichés,” decided the reviewer for Spiegel Online.

“The New York triumph was repeated in Berlin,” concluded the newspaper Tagesspiegel.

“Celebrated effusively by Berlin standards,” observed Stern magazine, the production nevertheless caused some theatergoers to wonder “whether it was really necessary to have so much Nazi paraphernalia onstage.” That’s not to mention the little Nazi flags with pretzels in lieu of swastikas that were handed out to everybody in the audience (including a troop of dirndled transvestites who waved them around like lost cheerleaders).

The Führer Returns to Berlin, This Time Saluted Only by Laughs.” You have to appreciate the devotion of the New York Times in spelling Führer correctly.