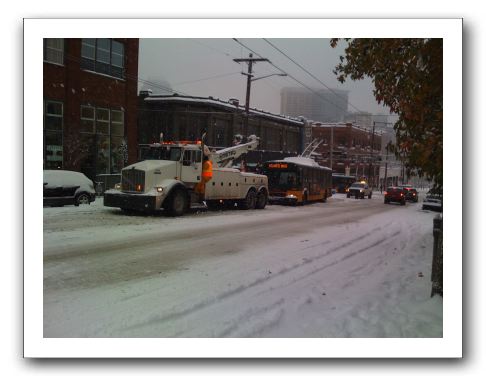 When Seattle is covered in snow, it’s easy to miss Montreal. Now, folks in areas that get lots of snow like to make fun of Seattlites for being unable to handle a little snow, but it turns out that there’s another reason (beyond the steep hills) the city has a (ahem) unique approach: “Seattle refuses to use salt; roads “snow packed” by design:”

But it turns out “plowed streets” in Seattle actually means “snow-packed,” as in there’s snow and ice left on major arterials by design. “We’re trying to create a hard-packed surface,” said Alex Wiggins, chief of staff for the Seattle Department of Transportation. “It doesn’t look like anything you’d find in Chicago or New York.”

[That’s right Chief Wiggins–you’d be fired if you tried that in Chicago or New York–Ed.]

That leaves many drivers, including Seattle police, pretty much on their own until nature does to the snow what the sand can’t: melt it. The city’s patrol cars are rear-wheel drive. And even with tire chains, officers are avoiding hills and responding on foot, according to a West Precinct officer.

Anyway, after what seems like a solid ten days of continuous snow, it’s 40F/4C and the snow is melting.

4 comments on "I miss Montreal"