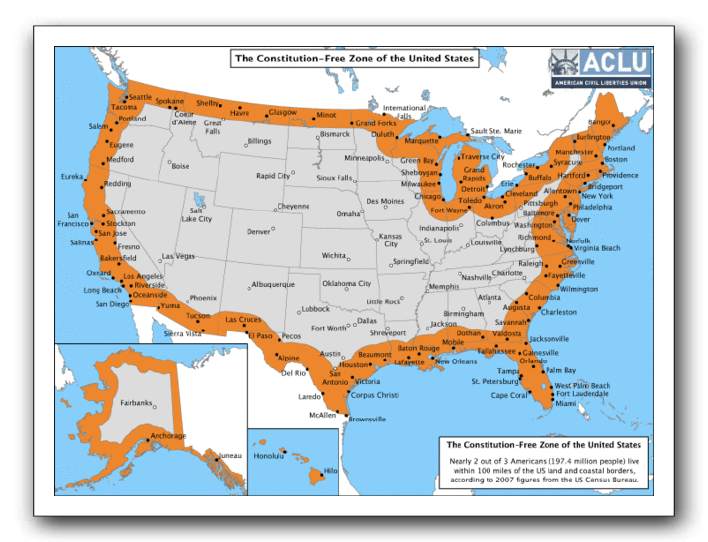 Government agents should not have the right to stop and question Americans anywhere without suspicion within 100 miles of the border, the American Civil Liberties Union said Wednesday, pointing attention to the little known power of the federal government to set up immigration checkpoints far from the nation’s border lines.

The government has long been able to search people entering and exiting the country without need to say why, which is known as the border search exception of the Fourth Amendment.

After 9/11, Congress gave the Department of Homeland Security the right to use some of its powers deeper within the country, and now DHS has set up at least 33 internal checkpoints where they stop people, question them and ask them to prove citizenship, according to the ACLU.

I found this map to be pretty shocking on two levels: first, and most importantly, I hadn’t realized that it was 100 miles from any border. (And if it really is any border, do the international airports count?) Which brings me to my second point: it was pretty surprising to see not only that two thirds of Americans live within 100 miles of a border, but that there are only a few major cities (Denver, Atlanta) which are not in that zone.

I also feel personally invaded to know that every time I use a ferry in Seattle, they scan my license plate and record that travel.

The map is a link to the ACLU’s page on the issue.