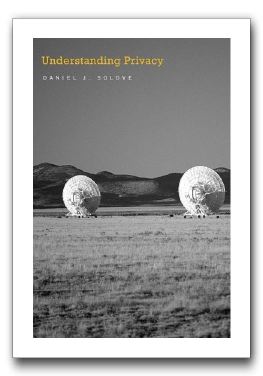 Dan Solove sent me a review copy of his new book, “Understanding Privacy.” If you work in privacy or data protection either from a technology or policy perspective, you need to read this book and understand Solove’s approach. That’s not to say it’s perfect or complete, but I think it’s an important intellectual step forward, and perhaps a practical one as well.

I’m going to walk through the chapters, and then bring up some of my responses and the reasons I’m being guarded.

Chapter 1 is “Privacy: A Concept in Disarray.” It lays out how broad and complex a topic privacy is, and some of the struggles that people have in defining and approaching it as a legal or social science concept. Chapter 2, “Theories of Privacy and Their Shortcomings” lays out, as the title implies, prior theories of privacy. Having thus set the stage, chapter 3 “Reconstructing Privacy“is where the book transitions from a review of what’s come before to new analysis. Solove uses Wittgenstein’s concept of ‘family resemblances’ as a way of approaching the ways people use the word. Privacy (as I’ve commented) has many meanings. You can’t simplify it into, say, identity theft. Solove uses family resemblances to say that they’re all related, even if they have very different personalities. Chapter 4, “The Value of Privacy” points out that one of the reasons we’re losing privacy is that it’s often portrayed as an individual right, based on hiding something. In policy fights, society tends to trump individualism. (Which is one reason the Bill of Rights in the US protects the individual.) Rather than calling for better protection of the individual, this chapter explores the many social values which privacy supports, bringing it closer to equal footing, and providing a policy basis for the defense and enhancement of privacy because it makes us all better off.

Chapter 5, “A Taxonomy of Privacy” is the core of the book. The taxonomy is rich. Solove devotes seventy pages to expounding on the harms done in not respecting privacy, and discussing a balance between societal interests of privacy and the reason for the invasion. In brief, the taxonomy is currently:

I’ve tried to apply this taxonomy to issues. For example, when I wrote “Call Centers Will Get More Annoying,” I used the taxonomy, although not the words. There’s surveillance, secondary use, increased accessibility and (what feels like a form of) intrusion. What the taxonomy doesn’t do is capture or predict my outrage. I think that that’s an important weakness, but it may well be asking too much. Solove’s goals of a societal balance don’t admit my outrage as a key factor. They can’t. Outrage is too individual.

I’m also concerned that perhaps this isn’t a taxonomy. If you read the old posts in my taxonomies category, you’ll see that I spent a bunch of time digging fairly deeply into what taxonomies are, how they come about, how they’re used and abused. I don’t think that Solove’s taxonomy really fits into the core of a taxonomy: a deterministic way to classify things which we find, which various practitioners can reliably use. As in my example of the call centers, the flaws are legion, and some of my classification may be wrong.

At Microsoft, we use STRIDE as a “taxonomy” of security issues (STRIDE is Spoofing, Tampering, Repudiation, Information Disclosure, Denial of Service, and Elevation of Privilege) I think, as a taxonomy, STRIDE is lousy. If you know about an issue, it’s hard to classify using STRIDE. The categories overlap. On the other hand, it’s very useful as an evocation of issues that you might worry about, and the same may be said of Solove’s taxonomy. I also don’t have a superior replacement on hand, and so I use it and teach it. Taxonomy-ness is not next to godliness.

My other issue with Solove’s taxonomy is that it doesn’t recognize the issuance of identifiers, in and of itself, as a privacy issue. I believe that, even before the abuses start, there are forseeable issues that arise from issuing identification numbers to people, like the Social Security Number. The act of enumeration was clearly seen by as an invasion by Englishmen who named the Doomsday book. The ability of the US government to even take a census is tied directly to the specified purpose of allocating legislative seats. I see it as self-evident, and haven’t been able to find the arguments to convince Solove. (Solove and I have discussed this in email now and then; I haven’t convinced him [that identifiers are, per se, a privacy harm])

Chapter 6 Privacy: A New Understanding closes the book with a summation and a brief discussion of the future.

The book has a strong policy focus. I am very interested in understanding how this new understanding intersects both broad laws and legal principles (such as the Fair Information Practices) and specific law (for example, HIPAA). The FIP, the OECD privacy statements, and Canada’s PIPED act all show up in the discussion of secondary use. I’m also interested in knowing if an organization could practically adopt it as a basis for building products and services with good privacy. I think there’s very interesting follow-on work in both of these areas for someone to pick up.

I also worry that privacy as individual right is important. Even though Solove makes a convincing case that that’s a weaker policy basis than the one he lays out, that doesn’t mean it’s not to be cherished as a social value, and I feel that the view of privacy which Solove presents is weaker to the extent that it fails to embrace this.

In closing, there are three major elements to the book: the first is to take us past the definitional games of “what is privacy.” The second is a serious attempt to address the “what do you have to hide” approach to privacy. The third is the taxonomy. Two of these would have been a pretty good book. Three are impressive, even as I disagree with parts of it. Again, this is an important book and worth reading if you work in or around privacy.