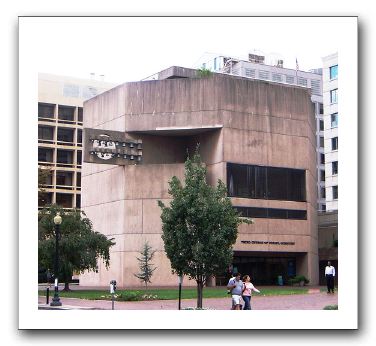 A Christian Science church near the White House filed suit against the city on Thursday, accusing it of trammeling religious freedom by declaring the church a historic landmark and refusing to allow church leaders to tear it down.

The building, a stark structure with walls that soar toward the sky, is an eyesore or a work of genius, depending on who is discussing it. The 37-year-old church was designed by Araldo A. Cossutta, who had been an architect in I. M. Pei’s firm, and declared a landmark in December.

Supporters of preserving the church, the Third Church of Christ, Scientist, say it is a sterling example of a style of architecture called brutalism, which is identified by repetitive geometric design and raw concrete. (“Church Sues over Landmark Status”=”

Me, I just think there’s something between irony and schadenfreude in there not only being a “brutalist” style of architecture, but that Washington DC wants to preserve it, over the objections of those subjected to it.

(Not to mention the questionable justification for the government creating and keeping a list of historic landmarks which their owners then must maintain.)