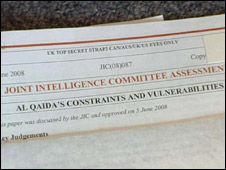 … unnamed Cabinet Office employee apparently breached strict security rules when he left the papers on the seat of a train.

A fellow passenger spotted the envelope containing the files and gave it to the BBC, who handed them to the police.

We are also told:

Just seven pages long but classified as “UK Top Secret”, this latest intelligence assessment on al-Qaeda is so sensitive that every document is numbered and marked “for UK/US/Canadian and Australian eyes only”, according to our correspondent.

The person who lost them is

… described as a senior male civil servant, works in the Cabinet Office’s intelligence and security unit, which contributes to the work of the Joint Intelligence Committee.

His work reportedly involves writing and contributing to intelligence and security assessments, and that he has the authority to take secret documents out of the Cabinet Office – so long as strict procedures are observed.

Apparently the documents were not encrypted. Cue rimshot.