Guinness is Good For You, but don’t tell anyone 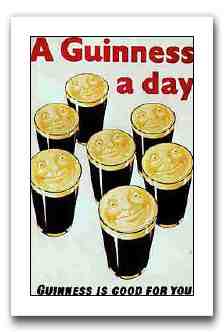 A pint of the black stuff a day may work as well as an aspirin to prevent heart clots that raise the risk of heart attacks.

Drinking lager does not yield the same benefits, experts from University of Wisconsin told a conference in the US.

The researchers told a meeting of the American Heart Association in Orlando, Florida, that the most benefit they saw was from 24 fluid ounces of Guinness – just over a pint – taken at mealtimes.

They believe that “antioxidant compounds” in the Guinness, similar to those found in certain fruits and vegetables, are responsible for the health benefits because they slow down the deposit of harmful cholesterol on the artery walls.

Even though it’s true, companies are scared of making health claims for booze. “Draft legislation could outlaw any health claims in adverts for alcohol in Europe, [a spokeswoman for Brewing Research International] said.”

It’s sad when the ability to make true statements is suppressed because ‘authorities’ worry that people are too dumb to listen to a bunch of statements and make up their own minds.

All quotes from the BBC, “Guinness good for you – official”