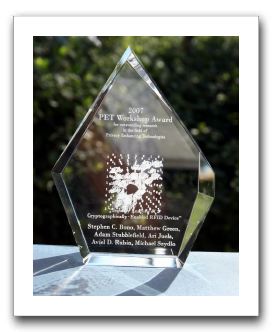 For the last several years, Microsoft has worked with the Privacy Enhancing Technologies community to support a prize for the best work done in the field. I’ve been involved as a member of the selection committee, but when I joined Microsoft, stepped away from that. It’s important to us that the prize is independent. This year, I MC’d a short ceremony, in which we announced that the award went to

Michael Szydlo was on hand to accept the award. The nice crystal is provided by the Ontario Privacy Commissioner’s office.

Caspar Bowden, chief privacy advisor for Microsoft Europe, Middle East and Africa, says, “Any peer-reviewed paper published in the preceeding year is eligible for nomination for the PET Award. We wanted to support a prize that was judged by leading privacy technologists, for leading privacy technologies. It’s a great way for the best researchers from a variety of fields within privacy research to recognise and support the exceptional technical work of their peers.”