(Excerpts from a letter to Mr. David Wood of the GAO. The complete letter is here.)
I am writing to you today to comment on your recent report, “Personal Information: Data Breaches Are Frequent, but Evidence of Resulting Identity Theft Is Limited, However, the Full Extent Is
Unknown” I found GAO’s report and its implied recommendations to be disappointing, and not representative of the usual high quality of GAO reports. This is, as you note, a difficult and challenging field in which to do research. As such, I am hesitant to criticize, and do so because of the esteem in which GAO reports are generally held. For ease of writing, I shall refer to GAO as “you.”

My concerns can be summarized as your analysis of the data fails to pursue important and possibly revelatory data to which the public does not yet have access, your selection of data sources lacks justification, you failed to consider (or discuss) alternate methodologies which may have resulted in different results, you make unjustified assumptions that companies can provide data, and you fail to identify systemic sources of bias in comments on which you rely. I will explain each of these concerns in order.

You were charged with “identifying what is known about the incidence and circumstances of breaches of sensitive personal information” (page 3). In a set of paragraphs from page 12 through 17, you list incidence and circumstance, and fail to analyze commonalities between your data sources. You even fail to bring them together to draw attention to how disparate they are:

This chart, in conjunction with your chart on page 26, indicates a several facts, which I believe are critical to the answer to the question of “identifying what is known about the incidence and circumstances of breaches of sensitive personal information.” In particular:

To state critique #4 differently, we don’t know if the breaches covered in the reports are heavily overlapping or not. Do they more closely resemble possibility 1 or possibility 2? 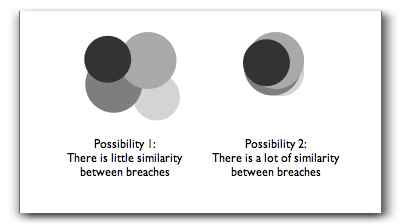 We don’t know. Many people instinctively believe in #2. What we do know is the one time the experiment has been done (New York vs. the University of Washington dataset, derived from Attrition) the data looked a lot more like possibility 1. To effectively answer Congress’s question, we need the answer, and GAO has not provided it.

I believe that a fair answer to the question would have pointed out these issues.

You do not justify your selection of the largest breaches. We have no reason to believe that the largest incidents have the same likelihood of identity theft, and there are reasons to believe that they will show a lower incidence. In particular, several of the largest incidents involve loss of backup tapes, which are likely in Iron Mountain and UPS warehouses. Some of the others may have been “trophy hunting” by hackers, where, rather than taking the data for profit, they were attacking for reasons of prestige.

A more reasonable methodology might have been to randomly select incidents from the data sets, or to investigate the largest and a random sample, in order to identify if biases (perhaps accounted for by the hypothesis above) were present.

You do not justify the size of your sample set. As you identified, there were at least 572 publicly reported incidents in your time sample (page 11). You examined 4.2% of these, and have no comment on how your sample size was selected.

You fail to justify your decision to start from data breaches. An alternative investigative methodology would have been to select a set of victims reporting ID theft to the FTC, FBI, or other source of criminal data, and trace those reports back to their source as best as could be done. This has a challenge in that (as you note) many of the victims of identity fraud do not know how they were victimized. GAO could have presented a list of known breaches to these individuals, and looked for correlations, or considered only the known cases.

There is an assumption that breached organizations are notified of identity theft by their customers. This assumption shows strongly on page 5, where you write, “available data and interviews with researchers, law enforcement officials and industry representatives indicated that most breaches have not resulted in detected incidents of identity theft.” However, there are several assumptions here. First is that a company who has suffered a breach would be told by a consumer that that consumer has suffered identity theft. Consumers have little motivation to do so, and so looking to companies as a source of data is, at best, a partial answer.

Even if a company’s call center representative was told that, the call center computers likely have no way to record that information. Modern call centers are expensive to run, and are often run from `scripts’ and ‘trees.’ If these trees have not been updated, even a company that had been notified of issues might not have captured and analyzed that information. Even if a company has captured and analyzed that information, it is likely being treated as highly sensitive in conversations with attorneys in order to contain liability. It is unlikely to be shared with industry association representatives, at conferences, etc. The information is likely to be kept close to the chest. Finally, even if the representatives with whom you spoke were aware of fraud, they might be biased against sharing that with you. They are likely aware that Congress is considering further regulations, and may be eager to sweep evidence of the breadth of the problem under the rug, to avoid further regulation.

As a final note before I conclude, you imply that notifications are expensive and complex, and seem to endorse a ‘reasonable likelihood of harm’ standard (although you do not come out and say so). Before you endorse such a standard, I would urge you to pay close attention to the difficulty that that would cause banks (as you cover on page 35). Absent more and better data on the relationship between breaches and fraud, it will be hard to figure the odds of fraud. The best way to get information on the relationship is to expand the datasets available to all researchers to allow and encourage research. A ‘reasonable likelihood of harm’ standard will prevent us from crawling out of the mess that we’re in today.

In conclusion, your failure to pursue important questions about the nature of the data, your failure to justify your data selection or sample sizes, your failure to explain your choice of methodologies in the presence of alternatives, and your assumptions that companies have the data you wanted, and would, unbiased, provide it, cause this report to be deeply flawed, and create a worrisome possibility that anyone relying on it would come to erroneous conclusions.

I would urge you to update your research to take these concerns into account. In the future, I would be happy to work with you on this subject, which I believe to be of considerable import.