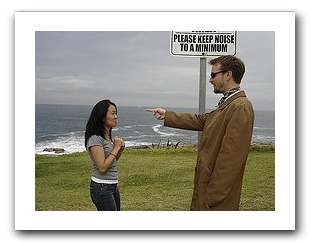 Tim O’Reilly with the help of others has posted a “Draft Blogger’s Code of Conduct” in reaction to l’affaire Sierra. Forgive me the pedantry, but I’ve corrected the plural in my derivative topic line above. There have been other comments about this in many other places. I’m not a friend of Sierra’s, but I have read and enjoyed her blog from time to time. As I’ve said before, in no way do I condone the way she’s been treated, and I will smile when the perps get their just desserts.

Nonetheless, I feel obligated to engage in one of the most odious tasks there is in a free society — defending free speech. It is an odious task because one has to do it in the wake of things that are at best barely defensible. If one is lucky, one defends it because the offense of the day is outraging parents. Those almost always have a snicker factor in them, making it easy to defend free speech. Video game outrages, especially those involving Rockstar Games are the most satisfying.

One notch below that is a childish (to one) brouhaha among people who basically (it seems to one) don’t believe in free speech anyway, who intrude upon us decadent Westerners. Every one of the [Insert Nation Here] Bans You Tube incidents fall into this broad category. This category gets more eye-rolling than snickering. However, if You Tube does anything other than stonewall, there’s often some nice meta-free-speech dudgeon and perhaps the opportunity for some good old ZOMG! Google is EEEEEVILLLL hyperventilating.

If one is less lucky, there’s a bad movie or book or art exhibit that has offended some group of people that the offender is a member or ex-member of. If one is even less lucky, the offense is cross-group. Even worse is when it’s some artist so talentless they can only get attention by incorporating into their art elements best left in a discussion of John Snow.

Worst of all is when one has to defend free speech when the no one is defending the offense. That’s where we are. I haven’t seen anyone defend the punks. Perhaps that says more about how few blogs I read than anything else, but I haven’t seen anyone of consequence saying, “…I know that this is offensive but…” We all seem to agree that this one is over the line. Yelling “Fire” in theatre — bad. Death threats — bad. Colorful death threats — worse. If we’re all in agreement that this is out of line, then, where is the need for the code of civility? We all agree this was unacceptably uncivil.

I am bothered by this because I wonder how the heck it’s going to solve the problem it’s aimed at. Many of the modern outrages we suffer are because there’s some solution that misses the problem and punishes the innocent rather than the guilty. Go to an airport, if you wonder what I mean. Why do we all have to submit to a civility code because the are — shock horror — a bunch of gits on the Internet? It’s not news that there are a bunch of gits on the Internet. The Internet has been the playground of gits for three or four decades.

In the opening paragraph of O’Reilly’s draft code, you can hear the overly-sanitized tone of voice they used when they doled out mass punishment in seventh grade. Blah, blah, one bad apple, blah, it’s with great sadness that I’m forced, blah, blah, because after all I’m the adult here. “Celebrate,” indeed, Mr O’Reilly.

Looking at section 1, libel is already illegal, as is harassment and stalking. The DMCA already obligates us to take down copyright infringement. I’m saddened that we can no longer fight or mock DMCA takedowns. I see that O’Reilly will be siding with Apple the next time they want to shut down a leaker, but whatever. And I suppose that infringing on trademarks means no more company-sucks.com domains, and that we will side with the movie industry when they want to seize a domain for a summer blockbuster.

It does bother me to read, “We won’t say anything online that we wouldn’t say in person. ” I wouldn’t say this in person. I wouldn’t make a grumpy pun on “draft” in person. I wouldn’t correct someone’s punctuation in person. I did both of those to make this point, that there’s nothing wrong with a little mixing it up in the blogosphere, and that would be inappropriate at a cocktail party. Furthermore, this empowers the sort of bully who would suggest in person, for example, that a Supreme Court Justice with whom they disagree should be poisoned to say pretty much anything they want to in a blog, but the rest of us are constrained. I make a point not to mention that particular person, but a code of conduct that lets such a person say what they want and stifles Scoble has an odd definition of civility.

It’s easier for the members of the blogorati who have each other on speed dial (or on their IM buddy lists) to connect privately. And let’s face it, if someone is going to act inappropriately, they’re not going to call their target up and say, “Hey, I’m going to make some obscenely grotesque death threats and photoshop your image into things that will really tick you off. I really hope you don’t mind, it’s nothing personal, I just hate your blogging and want to bully you into silence.” Again, this sounds good on the surface, but it won’t solve the problem and only punishes the innocent.

I like the “Don’t respond to trolls” item. I like how wonderfully, unintentionally ironic it is. I’m somewhat slow to post on this in part because I believe in measured response (if not always civil — I can’t tell if I’m being civil in this post, myself). But I wondered as I read it if it was O’Reilly’s own version of a troll. There are obvious ways to troll, and subtle ones. If one writes a post and thinks, “This will get a lot of responses.” then one is trolling. Again, however, no matter how good that advice is, how does it relate to l’affaire Sierra? Am I merely too busy with work to be madly searching every blog?

When we get to the “no anonymity” part, this gets past the snickers and eye-rolling and into the exasperated sighs. Various national and state governments have tried this, and usually we explain slowly that this is not only undesirable, but probably impossible. And besides, anonymity is harder than you think. Ask the Chinese bloggers who’ve been jailed or the guy who wrote John Siegenthaler’s bio in Wikipedia.

Calling for an end to anonymity on the Internet is kicking the ant hill, largely doomed to failure, and few people who want anonymity actually get it. It’s one thing to call for something that people will hate you for, but why do something people will hate you for that you will fail at? What’s changed? Do we all believe that a surveillance-enabled blogosphere is a good thing? Is the Chinese government now what we look to as a rôle model? Again, I will also add O’Reilly’s suggestion about IP addresses and a valid email address isn’t going to solve the problem.

Along with this retreat from what we generally stand for are other comments, such as those by Cynthia Brumfield in her “Blogging Guidelines Could Help Protect Free Speech.” Brumfield is in general, timid; Brumfield is loathe to write the word “porn.” I can hypothesize why, but Brumfield writes “p*rn” for whatever reasons. Fair enough, but there are many ways to respond to “Such a code constitutes peer pressure, perhaps, but it doesn’t take away anybody’s right to speak.” [Brumfield’s emphasis.] “Only if such a code were to become law, enforced by the government, would it represent a real threat to free speech.” And lastly, “In other words, self-regulation is a far better alternative than government regulation, an admittedly distant outcome right now but one that could become all too real if things get out of hand.”

Searching for a response, I rummage through my Closet Of Clichés, and I can find, “…burn the village to save it;” that overused bit from Franklin about security and liberty and deserving neither; some holier-than-thou tongue-clucking about my ancestors’ military service; as well as some sniggering over “admittedly distant;” a few allusions to Rushdie, Theo Van Gogh, or perhaps Pim Fortuyn to make it spicy; and oh, look — several relevant Princess Bride quotes are waving at me and leering (it’s a miracle that I’ve avoided those so far); but I think it might be best to go for a Jon Stewart boggle and push-back of the chair.

Come on, people, you don’t mean what you’re saying! Yes, Sierra’s been treated badly, but does this mean that the next time some high school kid with more HTML skills than sense Photoshops the principal’s photo you’re going to advocate ruining the kid’s life because oh, my God, this could have been another Columbine? Does it mean that when some loony shoots up their workplace that you’re going to be against anonymous bitch sites? If there is a genuine terrorist attack somewhere will you then think that thought crimes aren’t such a bad idea? No, you don’t think that and you won’t do those things. You’re smarter than that. You’re just caught up in the heat of the moment because an ugly thing has happened to a friend of yours. Take a few more deep breaths, and a few drops of Rescue Remedy.

Ugly things happen to good people, especially good people who write. Take a look at what’s been happening to Russian journalists of late. We’re not there, thank God. We are merely dealing with bullies. There are many ways to deal with bullies, and the ones that work include standing up more often than hunkering down. A code of civility is punishment for the innocent and is thus hunkering down.

It’s much better to be bold, to go on with life with enough courage to correct other people’s punctuation, and a thick enough skin to have your punctuation corrected. We’d be better off if we created an anonymous site with horrible pictures and depictions of what we’d do to those creeps. Giving them a taste of their own medicine is less destructive than treating all bloggers like wayward adolescents. I know several bloggers who are not wayward, and many more who are not adolescents. If we let this ugly incident eliminate what is vibrant about blogging, then, then — you — yes, you, with the “have won” on your shirt. Back in the Closet of Clichés, now. I mean it, and yes, it does mean what I think it means. And all of you Gentle Readers, you know what I mean, too. Let us fight madness with sanity.
Photo “Scold” courtesy of nami_jun. (And my apologies for not including credit for a couple hours.)