From the Heresy Desk 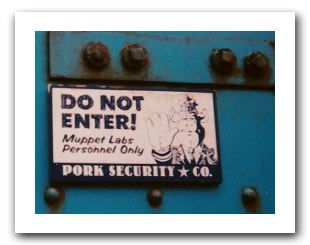 Before Bruce Schneier started using the term, “Security Theatre” was a term I heard from what I call Real Security People. I was designing a security-oriented NOC, and I interviewed people who built secure sites for a couple of governments, banks, and others. They said that what The Adversary thinks you can do is more important than what you can do. I was told that perception is the majority of security: “Maybe not two-thirds, but definitely more than half.” As the team built the system, we took this to heart, which made it more fun, at the very least. But I also heard from someone I know who nmapped our system and received an nmap in return that he decided it wasn’t a good idea to go further. In that case, at least, the security theatre worked.

We also used a bit of security-through-obscurity. We tweaked some of our network protocols so that they were merely incompatible with the off-the-shelf stuff. Our protocol banners lied. We particularly enjoyed having them declare that they were known vulnerable in odd ways. It was at least informative that the random attacks that came by were not tailored. No one ever tried Sparc vulnerabilities on that server claiming to be SunOS 4 with Bind 3. They hit it with the Windows buffer overflows anyway. That was disappointing, but we also learned an important lesson — the only people who care what your banners say are the good guys. The bad guys find it more economical to just spray you with whatever exploits they have in their bag of tricks. Or at least most of the bad guys.

Security through obscurity has gotten a bad rep in part because there are people who think that merely by being obscure is being secure. There are also people who think that a mediocre security system can be made secure by being obscure. If, however, you start with good security and then put a bit of obscurity on the top, it’s a bonus. Think of security as armor and obscurity as camouflage. Camouflage is not armor; obscurity is not security. People who tell you it is are trying to sell you something. However, if an attacker is faced with armored things that are also camouflaged, their job is harder. If you back up the camouflage with good log analysis, then you can take the element of surprise away from the attacker. The total effect is good security theatre, a theatre that might result in deterrance. Just be honest about it, especially to yourself. If the attacker discovers you have no armor behind the camouflage, then you have a well-prepared opponent.

There are other reasons to eschew obscurity. It isn’t scalable, and it doesn’t lead to market solutions. You can’t shop around for the best obscurity. The notion of a global secret is somewhere between ironic and silly. This is why DRM systems don’t work against determined attackers. However, not everything needs to be open, scalable, and market-driven. If you are building a system that is closed, proprietary, and local (such as the secure NOC I was working on), obscurity can be a valuable spice in the dish that makes a tasty meal tastier.

We are also seeing changes in the threat model that justifies a revision in our defense model. A few years ago, the attackers were using broadcast attacks. They didn’t look at the lies we told them because they were unskilled attackers throwing all the handy exploits they had. They wouldn’t see embarrassments that didn’t fit their model. I have a story about that I’ll post soon.

Here’s an informal example. Suppose I divide my system into an external “red” network and an internal “black” network. All connections use TLS with AES-256, but on the black network, we are not using standard AES, we’re using a modified AES that real cryptographers agree is as secure, just incompatible with AES; call it AEN for Advanced Encryption Non-standard. Cryptographers have a formal notion of this that they call “family keys.” AEN is my spice. On the black network, you’re expected to use AEN. We just compiled it into OpenSSL where AES was supposed to be. The resulting system is just as secure as one that uses AES everywhere, but has this extra little twist. It makes the attacker’s job harder, and makes our job of detecting an attack easier. It has costs, of course, which you can think of as well as I can. But in my system, which is not only closed, but I want to be closed, they’re not bad costs to pay. Even better, if I publicize that I’ve done this, I might convince an attacker to target someone else.

If you remember that obscurity is not security, that it is camouflage rather than armor, that it is not scalable, that it is only as good as the obscurity itself is, there might be places you can use it effectively. Also, not all security theatre is bad. What is bad is only having theatre and not backing up obscurity with real security.
Photo of theatre security courtesy of Luigi Rosa.

6 comments on "From the Heresy Desk"