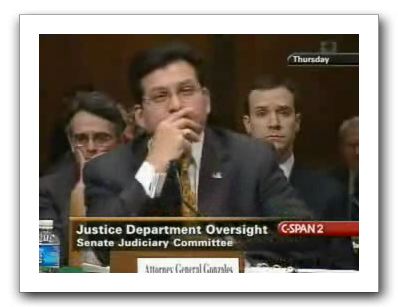 On January 18th, Attorney General Alberto Gonzales testified in front of the Senate Judiciary Committee. As part of the hearings, there was a discussion of habeas corpus. As part of that discussion, Gonzales said:

There is no express grant of habeas in the Constitution.

Yes that’s right, our own Attorney General thinks that there is no guaranteed right in the U.S. to habeas corpus. He even got more explicit when he said:

the Constitution doesn’t say, ‘Every individual in the United States or every citizen is hereby granted or assured the right to habeas.’ It doesn’t say that. It simply says the right of habeas corpus shall not be suspended . . .

Think Progress has the full transcript and video from C-SPAN2. including where Senator Spectre appropriately takes Gonzales to task. The video in particular is a must see if only for the goofy expressions on Gonzales’s face.
Via Balkinization, who as usual has an excellent analysis.