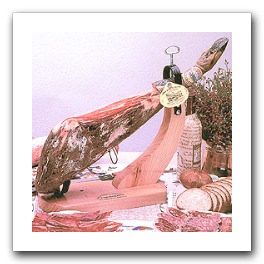 (or “The New York Times Gets Self-Referentially Ironic“)

… he recognizes that plenty of people must think that rounding up friends and family members to go in on a thousand-dollar ham that he envisions hanging in his living room is crazy. But food lovers like him understand, he says. And in the end, the elaborate narrative of the ham (the way it is produced, his advance payment, the visit to the picturesque town in western Spain where it’s made) is a thing to be savored almost as much as the meat itself. “I must say,” Saltzman adds, “I’ve gotten incredible mileage out of the whole ham story.”

The image is from La Tienda, who are charging $1200 for a (roughly) 15 pound ham, or roughly $80 per pound, which, frankly, doesn’t sound nearly so bad. It’s in range with foie gras, and it’s even legal in Chicago.

2 comments on "Hamming it Up"