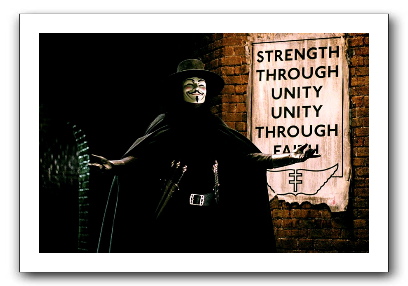 On the plane home from England, I watched V for Vendetta. (If you haven’t seen it, the basic story is that terror attacks cause turn England into a police state, and a masked freedom fighter terrorist blows things up and kills people and makes it all better. Oh, he plays with Natalie Portman’s head, too. It was a nice bit of eye candy. Attractive as the idea may be, blowing up Parliament is unlikely to regain us our liberties. And actually, it’s not really clear if its all better at the end.

Last week, the Supreme Court finally told the Bush administration that their claims about the breadth of executive power were false, in the Hamdan decision. It’s a sad day for America when we have to be happy with a decision that the President may not arbitrarily kidnap people and jail them without a trial, but hey, we take what we can get until we can get better.

At Obsidian Wings, Hilzoy wrote about the question of other detention facilities in “Hamdan, the Bigger Picture.” Similarly, Jack Balkin writes in “Hamdan and the NSA Dispute:”

The Court rejected both of these positions in Hamdan. It held that “Neither [the AUMF or the Detainee Treatment Act] expands the President’s authority to convene military commissions. . . .[T]here is nothing in the text or legislative history of the AUMF even hinting that Congress intended to expand or alter the authorization set forth … “Together, the UCMJ, the AUMF, and the DTA at most acknowledge a general Presidential authority to convene military commissions in circumstances where justified under the `Constitution and laws,’ including the law of war.”

Waiting for the courts is not so effective as loud and peaceful protest. Why more people haven’t protested over the way our liberties have been sold for a little temporary safety, I’m not sure. So I’m glad the courts are doing their part. Finally.