I Bet He Failed The Background Check 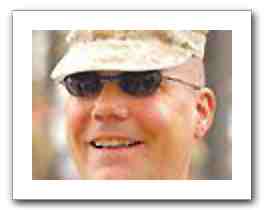 Staff Sgt. Daniel Brown is having trouble getting on a plane. He’s apparently known to work in close proximity to terrorists:

A Minnesota reservist who spent the past eight months in Iraq was told he couldn’t board a plane to Minneapolis because his name appeared on a watch list as a possible terrorist.

Marine Staff Sgt. Daniel Brown, who was in uniform and returning from the war with 26 other Marine military police reservists, was delayed briefly in Los Angeles until the issue was cleared up.

Brown, 32, of Coon Rapids, was returning from service in the Al-Anbar province of Iraq, known as the dangerous Sunni Triangle. He ran into problems at the Los Angeles airport on Tuesday morning.