Emergent Map: Streets of the US

This is really cool. All Streets is a map of the United States made of nothing but roads. A surprisingly accurate map of the country emerges from the chaos of our roads: 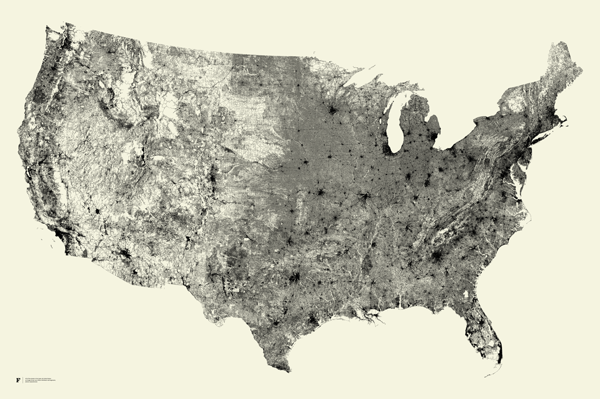 All Streets consists of 240 million individual road segments. No other features — no outlines, cities, or types of terrain — are marked, yet canyons and mountains emerge as the roads course around them, and sparser webs of road mark less populated areas. More details can be found here, with additional discussion of the previous version here.

In the discussion page, “Fry” writes:

The result is a map made of 240 million segments of road. It’s very difficult to say exactly how many individual streets are involved — since a winding road might consist of dozens or even hundreds of segments — but I’m sure there’s someone deep inside the Census Bureau who knows the exact number.

Which raises a fascinating question: is there a Platonic definition of “a road”? Is the question answerable in the sort of concrete way that I can say “there are 2 pens in my hand”? We tend to believe that things are countable, but as you try to count them in larger scales, the question of what is a discrete thing grows in importance. We see this when map software tells us to “continue on Foo Street.” Most drivers don’t care about such instructions; the road is the same road, insofar as you can drive in a straight line and be on what seems the same “stretch of pavement.” All that differs is the signs (if there are signs). There’s a story that when Bostonians named Washington Street after our first President, they changed the names of all the streets as they cross Washington Street, to draw attention to the great man. Are those different streets? They are likely different segments, but I think that for someone to know the number of streets in the US requires not an ontological analysis of the nature of street, but rather a purpose-driven one. Who needs to know how many individual streets are in the US? What would they do with that knowledge? Will they count gravel roads? What about new roads, under construction, or roads in the process of being torn up? This weekend of “carmageddeon” closing of 405 in LA, does 405 count as a road?

Only with these questions answered could someone answer the question of “how many streets are there?” People often steam-roller over such issues to get to answers when they need them, and that may be ok, depending on what details are flattened. Me, I’ll stick with “a great many,” since it is accurate enough for all my purposes.

So the takeaway for you? Well, there’s two. First, even with the seemingly most concrete of questions, definitions matter a lot. When someone gives you big numbers and the influence behavior, be sure to understand what they measured and how, and what decisions they made along the way. In information security, a great many people announce seemingly precise and often scary-sounding numbers that, on investigation, mean far different things than they seem to. (Or, more often, far less.)

And second, despite what I wrote above, it’s not the whole country that emerges. It’s the contiguous 48. Again, watch those definitions, especially for what’s not there.

Previously on Emergent Chaos: Steve Coast’s “Map of London” and “Map of Where Tourists Take Pictures.”

One comment on "Emergent Map: Streets of the US"