An Infosec lesson from the "Worst Play Call Ever"

It didn’t take long for the Seahawk’s game-losing pass to get a label.

But as Ed Felten explains, there’s actually some logic to it, and one of his commenters (Chris) points out that Marshawn Lynch scored in only one of his 5 runs from the one yard line this season. So, perhaps in a game in which the Patriots had no interceptions, it was worth the extra play before the clock ran out.

We can all see the outcome, and we judge, post-facto, the decision on that. 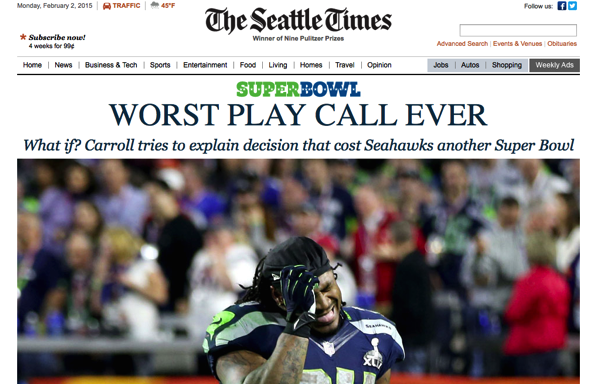 In security, we almost never see an outcome so closely tied to a decision. As Jay Jacobs has pointed out, we live in a wicked environment. Unfortunately, we’re quick to snap to judgement when we see a bad outcome. That makes learning harder. Also, we don’t usually get a chance to see the logic behind a play and assess it.

If only we had a way to shorten those feedback loops, then maybe we could assess what the worst play call in infosec might be.

Hindsight is 20/20 in football. It’s easy to focus in on a single decision. But the lesson from Moneyball, and the lesson from Pete Carroll is Really, with no second thoughts or hesitation in that at all.” He has a system, and it got the Seahawks to the very final seconds of the game. And then.

One day, we’ll be able to tell management “our systems worked, and we hit really bad luck.”

[Please keep comments civil, like you always do here.]