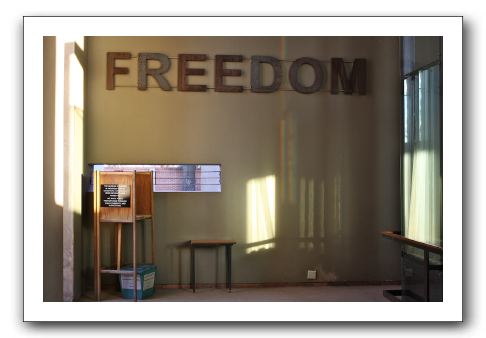 Twenty years ago today, Nelson Mandela was released from prison on Robben Island, where he was imprisoned for 27 years for considering violence after his rights to free speech and free association were revoked by the government.

I learned a lot about the stories when I visited South Africa, and then more when my mom sent me “The World that was Ours” by Hilda Bernstein. She was an activist and the wife of one of the “Rivonia Trial.” Her book is a highly readable account of what life was like, and how people who started out as reformers were radicalized by increasingly bizarre and ineffectual attempts by the government to exert control.

It also gives a good sense of how absurd the actions of the apartheid system became as time went on. I could make snarky comparisons to the TSA, and believe me, I’m tempted. But the simple truth is that as bad as things have gotten in the US, they generally don’t even approach the dysfunction which existed in South Africa.

Looking at South Africa today, it’s easy to forget that twenty years ago, the country was engaged in an active race war with government forces shooting into funeral crowds every weekend. The work that Mandela, Desmond Tutu, and F.W. De Klerk and others did to stop the violence and build the society which exists in South Africa today is one of the success stories of our time. Yes, it has deep imperfections, but so does the world.

Photo from the Apartheid Museum. On the left is a ballot box.