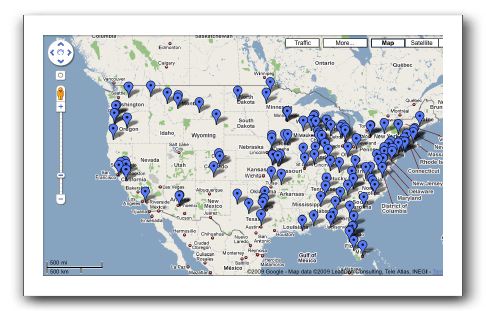 [Yesterday was] the start of Banned Books Week 2009, the 28th annual celebration of the freedom to choose what we read, as well as the freedom to select from a full array of possibilities.

Hundreds of books are challenged in schools and libraries in the United States each year. Here’s a great map of challenges from 2007-2009, although I’m sure it under-represents the nature of the problem, as most challenges are never reported. (Note the West Bend library controversy is marked on the map.)

According to the American Library Association, there were 513 challenges reported to the Office of Intellectual Freedom in 2008.

I’m somewhat surprised by how many bluenoses dots there are in the northeast. Does anyone know of a good tutorial that would help me to re-map the data against population?