First Impressions of the 2008 Ponemon Report

So the 2008 Ponemon breach survey is out and I’m reading through it, but I wanted to expand on the headline: “Ponemon Study Shows Data Breach Costs Continue to Rise.”

This is the report’s figure 3: 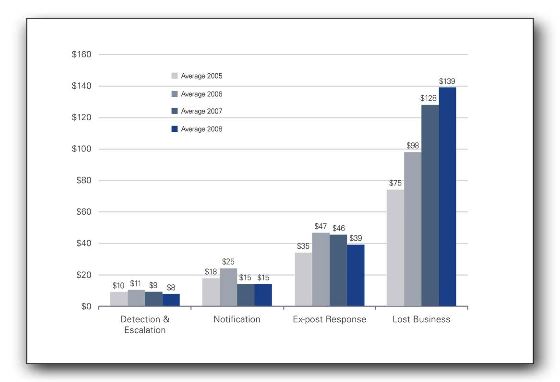 Left to right, those are “detection and escalation,” notification, “ex-post response” and “lost business.” I note that 2 fell, one is flat, and one rose. The lost business number is a survey estimate, an extrapolation.

I am, to be frank, somewhat skeptical of these lost business numbers. I think that the estimates are now at risk of being “self-feeding,” where people take one of the estimates they’ve seen from prior reports, and build an estimate on that, adding a little “because this is a bad one.”

I’m also pretty surprised to see that 5 industries reported churn rates above 5%. They are healthcare, financial, energy, communications, and ‘services.’ I’m not as skeptical here–these are easier to measure for both the reporter and the surveyor. I am surprised because at least health and financial can have pretty good lock in. I tend to agree with the analysis that “[The] growth in lost business costs demonstrates consumers do not take a breach of their trust and privacy lightly and have not become desensitized to the issue.”

So I’m pretty sure I have readers who have been involved in a breach response process. Can you comment (anonymously if you’d like) about how accurate you think these calculations are? What margin of error would you assign to your own organization’s estimates of lost business?

[Update: Black Fist has interesting and similar analysis in “ Risk analysis: Cost of breaches and rolling your own numbers,” which I just saw.]

10 comments on "First Impressions of the 2008 Ponemon Report"