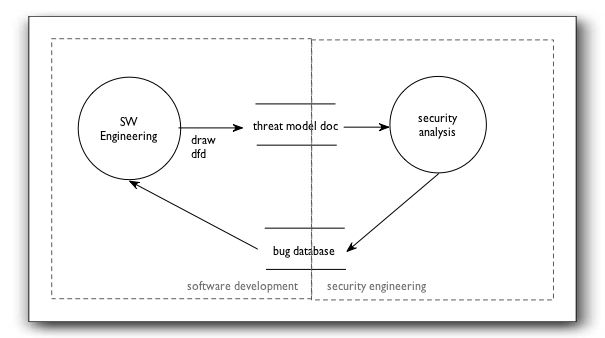 Ethonomethodologists talk a lot about communities of practice. Groups of people who share some set of work that they do similarly, and where they’ll co-evolve ways of working and communicating.

When everyone is part of a given community, this works really well. When we talk about “think like an attacker” within a community of security practice, it works well. When we tell developers to do that, they look like a deer in the headlights. (Sorry, couldn’t resist.)

One of the tools which different communities of practice can use to communicate is a boundary object. Boundary objects include things like ISBNs. Books have ISBNs in large part to track payments. They differ from Library of Congress catalog numbers. 0321502787, HD30.2.S563 and “The New School of Information Security” all refer to the same book in different contexts.

The DFD acts as a boundary object because it’s simple. It takes about 30 seconds to learn (except for trust boundaries). It looks a lot like most whiteboard diagrams. Developers can draw the diagram, and security experts can analyze it.

The second boundary object is the bug database. Everyone in software development understands bug databases. And though the practices which surround them differ pretty markedly, almost no one would ship a product without reviewing their bugs, which is why security people like putting the output of a threat modeling session into the database.

There are other possible boundaries, such as the interface between the business and the software. This is where assets come into some threat modeling approaches.

So what’s the takeaway here? If you’re watching groups of people frustratedly talk past each other — or wishing they’d be that communicative — look to see if you can find boundary objects which they can use to help organize conversation.