News and Lessons from the Auto Market 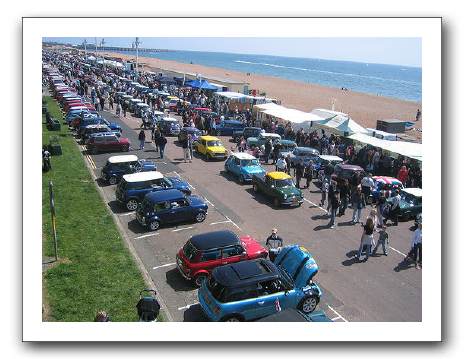 “There are no hot segments,” said George Pipas, Ford’s market analyst. “And there really are no hot products.”

Soon, Ford will be caring about MINI’s market of “only” 60,000 cars a year, which is admittedly a lot fewer cars than Ford sells, and makes it easier to be up.

But I’d like to look a little beyond this for some lessons. I think MINI is pretty prescient in a couple of ways. It’s not just small before small was big. It’s not just cute. What’s really big is the mass customization story and what it means to customer involvement. Almost every MINI is different. The number of factory options is staggering, and then there’s a thriving aftermarket.

So while the Ford will still sell you any color you want as long as it’s black, white or grey, MINI has a dozen colors, some exuberant, and will sell you the roof in the body color, or white or black, and you can get either matching mirror caps, or customize those.

The customization and consumer involvement it brings is huge. A little chaos goes a long way, especially when you’re looking to stand out from the crowd.

As a CTO or as a program manager passionate customers who help you stand out from the crowd can be huge. But your customers can’t really do this unless you prime them. It’s your product. What features are going to excite your customer?

Ford may have answers. In fact, they seem to have better answers than the other American car makers. But they don’t have a wow. And a wow, an emotional response, a tug at the heartstrings is at the core of why MINI was up 56% while GM was down 45.

I drafted this back at the beginning of November, and as I’m getting ready to post, I saw “MINI Shutting Down Production for December,” and “Worldwide MINI sales down 12% for the year.” Near as I can tell, the October numbers are accurate, but I wanted to include context.

Photo: “Lots of Minis” by SquareGraph

2 comments on "News and Lessons from the Auto Market"