Keeping abreast of the threat 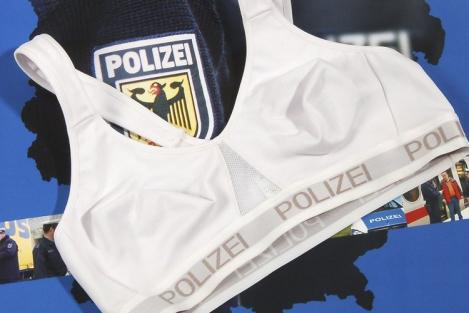 The German Bundespolizei have announced what the BBC are calling a “bullet-proof bra“.

It may sound like a joke, but this is a serious matter – the policewoman who came up with the idea said normal bras can be dangerous when worn in combination with a bullet-proof vest.
“The impact of a bullet can push the metal and plastic bits of the bra into an officer’s body, causing serious injury,” said Carmen Kibat, an adviser on equal opportunities for the Hamburg-based Bundespolizei – Germany’s federal police force.
“I always thought normal bras posed a safety risk and I wanted to change that,” she said.

Now, I’m sure Frau Kibat’s heart is in the right place, and I would certainly not want it to be pierced by either a bullet or a brassiere clasp or underwire fragment, but I have to suggest here that “I always thought” doesn’t suggest that the decision to develop this article was made based on empirical data.
While I admit it’s interesting to see “Polizei” on a brassiere, it’d have been better to ask those that are concerned about the “risk posed by normal bras” to simply buy one that is made entirely of cloth, since they are readily available through non-governmental channels.
Photo: Reuters, via Die Welt

3 comments on "Keeping abreast of the threat"