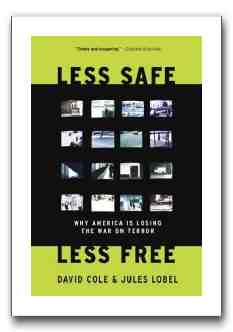 I’d like to review two recent books on the war on terror: “Bush’s Law: The Remaking of American Justice” by by Eric Lichtblau, and “Less Safe, Less Free: Why America Is Losing the War on Terror” by David Cole and Jules Lobel. Both are well written assaults on the way in which the Bush administration is conducting itself, although each takes a tact aligned with the author’s background and history. Lichtblau is a reporter, currently for the New York Times, and Cole and Lobel are law professors.

Bush’s Law is an extended view into some of the major stories that Lichtblau has covered. Included are the NSA’s warrant-less wiretapping, the SWIFT following of the money, and the Comey/Ashcroft hospital story. Even as someone who follows these stories fairly closely, I still learned quite a bit-some new, some not previously reported, and all better organized and more readable than in the newspaper. The theme that emerges from Bush’s Law is one of secrecy, and the conflict which a free society faces when repeatedly begged to `trust us’ by an administration which seems to not understand how its actions undermine trust.

The undermining of trust is also a major theme of Less Safe, Less Free. Before getting into the meat of the book, let me say that this is law professor writing at its best. It’s clear and compelling, and the notes are at the end. They lay out a strong case that the Bush administration’s concept of how to engage with the world is is at its core, preventative, rather than reactive. In theory, this seems like a great plan. In practice Cole and Lobel show how it inevitably undermines the concepts of justice on which our society is founded, as well as our reputation with the rest of the world. That is, it is not merely a practical failure, it was inevitably going to be a practical failure. Predictions are hard, especially about the future. Reasonable people may disagree on the reasonableness of a preventative action. The difficulty of reaching proof “beyond a reasonable doubt” about what would have happened undermines the legitimacy of claims about the future.

The essence of their argument is that prevention, be it preventative war, such as in Iraq, or preventative law enforcement, such as with the justice, always requires the showing of evidence. You can’t simply detain someone because they might in the future commit a crime. In a court, no single body acts as judge, jury and executioner. Each party gets their day in court, with an opportunity to examine the evidence against them. These things are impossible in the preventative paradigm. Not only are sources and methods secret (sometimes with good reason), but the evidence is often lacking. In the case of war, the court is that of public opinion in many places. They also show a plethora of historical cases where preventative war went horribly wrong, and relate preventative war to a set of regimes with which no reasonable person wants to be associated.

The core reason which we demand that justice be reactive, or, at its fastest, at the instant of a crime, is that we rightfully fear the powers we invest in our government. It is a mighty and fearsome machine which can crush anything in its path. When it is allowed to do so, we are all less safe, and less free.

Two asides: I paid for both books, and I love the endnote styling of page number, excerpt, note used in Bush’s Law.