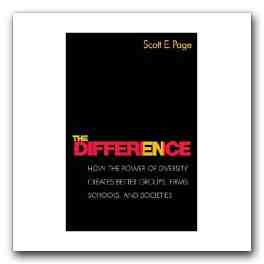 A lot of people think of calls for diversity as fuzzy headed liberalism at its worst. If you’re one of them, please keep reading. Or you could click here and just buy Scott Page’s book and read that, which is what I’d like to convince you to do.

This is a book about problem solving. He starts with a set of observations about how we see the world, and how different people bring different approaches and perspectives to the same problem. His approach is mathematically grounded, although you can skip the math or delve into it. He talks about how bringing different perspectives, heuristics, interpretations and predictive models to a problem can result in super-addative results, as one person helps another overcome blockers.

From there, he looks at how groups compare to experts, and looks at those situations where a group will do better than an expert, even when no member of the group is as sophisticated or broad as the expert. He also looks at those places where averaging over the crowd can get you better results–that if the perspectives are different (and relevant) then a crowd may well have a more intricate model than any one expert.

He also talks about differences between instrumental and fundamental preferences. (We should walk to the park, we should bike to the park, versus we should go to the park or the movies) and how diversity in the latter doesn’t always lead to better results.

He doesn’t make the point that such fundamental diversity of preferences should lead us to prefer liberty. I’m somewhat surprised by this, because it ties to his main points so well. If we want very different things, then we gain a lot by allowing people to make their own choices: some good, some bad, but reducing coordination costs.

It’s been a fascinating read, and I think it will have substantial long-term impact on my thinking. Thanks to Jon Pincus for the pointer. Also, I’ve decided to experiment a bit with Amazon affiliate links, and wanted to disclose that before Threat Level got revenge.

3 comments on "Scott Page’s The Difference"