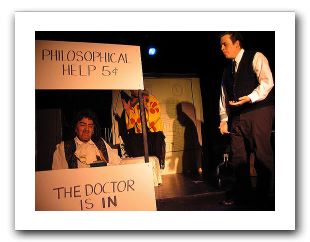 Or perhaps more correctly, did not internalize Descartes when he heard of him. In “Our Lives, Controlled From Some Guy’s Couch,” John Tierney writes:

Until I talked to Nick Bostrom, a philosopher at Oxford University, it never occurred to me that our universe might be somebody else’s hobby. I hadn’t imagined that the omniscient, omnipotent creator of the heavens and earth could be an advanced version of a guy who spends his weekends building model railroads or overseeing video-game worlds like the Sims.

It is for occasions such as these that the expressions “gobsmacked” and “WTF” were created. How could you survive to adulthood, let alone get a degree in what I presume was some sort of liberal arts, let alone get a job at The Paper of Record, and not once wonder about whether reality is real? This also suggests that the poor thing’s youth was insufficiently misspent.

Perhaps the real interesting work in this sort of liberal arts has moved to the likes of Edward Fredkin at MIT.

It’s a great article, and I’m happy that serious newspapers are talking about things like this. But in World of Warcraft, a simulation that he gives as a comparison, the characters there have a repertoire of jokes. One of the jokes that a woman might say is, “Do you feel that you aren’t in control of your own destiny — like — you’re being controlled by an invisible hand?”

I’m pleased that Oxford philosophers think about this, and I’m glad that professional journalists are paying attention to it rather than the usual fluff. For our children, however, this is just part of popular culture.

7 comments on "NYT Reporter Has Never Heard of Descartes"