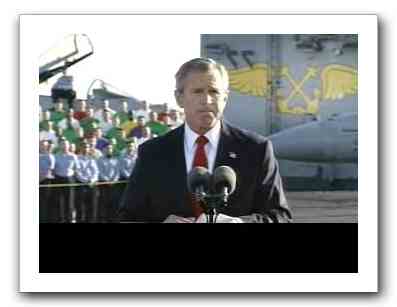 The White House has been gloriously editing history for the edification of the people. Or, as Roger Bakel points out:

Remember Bush’s speech on the aircraft carrier three and a half years ago, in which he declared an end to major combat in Iraq while standing under that instantly notorious ‘Mission Accomplished’ banner? Well, the White House doesn’t want you to remember. In fact, it never happened, all right? Just go to the White House website and look at the video footage of that event (scroll all the way to the bottom of the page and click on the video link for May 1).

In other news, the Republicans have increased their House seats to 195, and will continue to struggle to contain the mistakes of the Democrats, and help the country to stay the course.