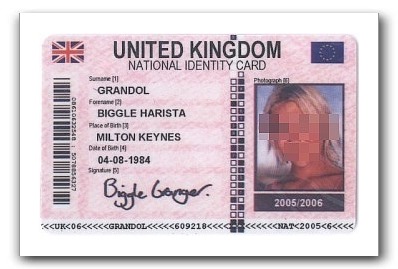 TONY BLAIR’S flagship identity cards scheme is set to fail and may not be introduced for a generation, according to leaked Whitehall e-mails from the senior officials responsible for the multi-billion-pound project.

…
[Peter Smith, acting commercial director at the Identity and Passport Service] reveals that the contracts for the ID card scheme are under threat because of “the amount of rethinking going on about identity management”. He also says they are “[un]affordable”; “lack clear benefits from which to demonstrate a return on investment”

Two quick comments, and a hurrah:

“The amount of rethinking going on about identity management..” Congratulations to Kim Cameron, Tom Maddox, Stephan Brands, Dick Hardt and all the other identity 2.0 people who have made enough noise that the old school didn’t see fit to push their schemes on the world.

And most importantly, a hurrah for the resistance from the London School of Economics, Liberty, and the rest for putting the scheme in a well-deserved early grave. I am hopeful that it will take some careers with it, so that no one will be tempted to try to revive it.

ID Card from Phatism, a free market solution to the problem.