Back in January, I wrote about “The Dope Cycle and the Two Minutes Hate.” In that post, I talked about:

Not kidding: even when you know you’re being manipulated into wanting it, you want it. And you are being manipulated, make no mistake. Site designers are working to make your use of their site as pleasurable as possible, as emotionally engaging as possible. They’re caught up in a Red Queen Race, where they must engage faster and faster just to stay in place. And when you’re in such a race, it helps to steal as much as you can from millions of years of evolution. [Edit: I should add that this is not a moral judgement on the companies or the people, but rather an observation on what they must do to survive.] That’s dopamine, that’s adrenaline, that’s every hormone that’s been covered in Popular Psychology. It’s a dope cycle, and you can read that in every sense of the word dope.

I just discovered a fascinating tool from a company called Dopamine Labs. Dopamine Labs is a company that helps their corporate customers drive engagement: “Apps use advanced software tools that shape and control user behavior. We know because [we sell] it to them.” They’ve released a tool called Space: “Space uses neuroscience and AI to help you kick app addiction. No shame. No sponsors. Just a little breathing room to help you take back control.” As they say: “It’s the same math that we use to get people addicted to apps, just run backwards.” 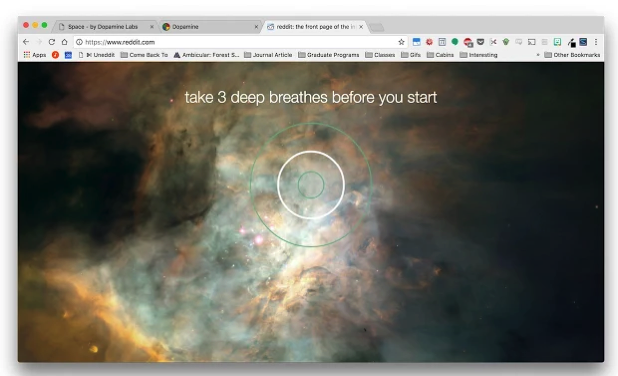 There are some fascinating ethical questions involved in selling both windows and bricks. I’m going to say that you participants in a red queen race might as well learn what countermeasures to their techniques are by building them. Space works as a Chrome plugin and as an iOS and Android App. I’ve installed it, and I like it more than I like another tool I’ve been using (Dayboard). I really like Dayboard’s todo list, but feel that it cuts me off in the midst of time wasting, rather than walking me away.)

The app is at http://youjustneedspace.com/.

As we go into big conferences, it might be worth installing. (Also as we head into conferences, be excellent to each other. Know and respect your limits and those of others. Assume good intent. Avoid getting pulled into a “Drama Triangle.”)