Rogue One: The Best Star Wars Yet? 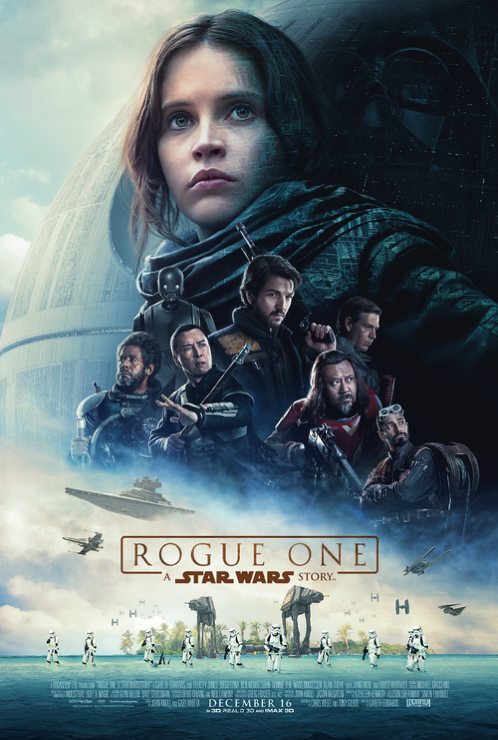 Someone once asked me why I like Star Wars more than Star Trek. I was a bit taken aback, and he assumed that since I use it so much, I obviously prefer it. The real reason I use Star Wars is not that it’s better, but that there’s a small canon, and I don’t have to interrupt the flow of a talk to explain the scene where Darth Vader is strangling someone. But let’s face it, Star Trek was often better as science fiction. There are four or five bright lights that rank up there as some of the very best storytelling of the last few decades.

Trek at its most poignant was a transparent mirror to the world. The original series commented on Vietnam and race repeatedly in ways which let people see another way of looking at a situation. Moral nuance is easier to see when the ox being gored isn’t yours.

Rogue One is the first Star Wars with moral complexity. If you haven’t seen it, I find your lack of faith…disturbing. But when there’s a guy who cost you your limbs, your children, and threw the galaxy into civil war, throwing him in the reactor core isn’t a very complex choice. In fact, the whole “dark side” is a bit of a giveaway. In case you miss that, the Jedi were guardians of peace and justice throughout the galaxy. Are we clear yet? No? How about the Nazi uniforms? I could go on, but we’re gonna get to spoilers. My point is, the first four films were great action movies. Maybe we’ll see some moral complexity when someone finally gets around to filming the tragic fall of Anakin Skywalker, reputedly the core story of I-III. But I’m betting they’ll be action movies with talking teddy bears for the kids.

Speaking of morality, if you’re just now noticing that your political world resembles the Empire’s, or if you’re angry that the script seems to mock your party…maybe you should look at your world through that mirror and ask if you’re on the right side of morality or history. After all, that’s what makes for great science fiction. The opportunity to see the world through a new lens. And the fact is, the story was not substantially re-written. “Rogue One’s Discarded Dialog” and See 46 shots that were cut from Rogue One” show a story with a little less character, a little more army, but not a sympathetic, racially and species-diverse Empire. The movie wasn’t re-written as a commentary on 2016.

Structurally, Rogue One is a war story, not an action story. It’s not about the hero’s journey, or Luke growing up. It’s a story about the chaos that follows a civil war, and it’s messy and has characters who make choices from a set of bad options.

When Cassian shoots the fellow so he can escape at the start? Galen Erso’s decision to work on the Death Star, delay it, and insert a flaw (or two?) These are perhaps the wrong choices in bad situations. We don’t see why Saw Gerrera and the Rebel Alliance split. We see the Rebellion at its worst — unable to take action in the face of imminent destruction, and then impulsively chasing Rogue One into battle. (What Rogue One Teaches Us About the Rebel Alliance’s Military Chops is a great dissection of this.)

But we can look to Galen Erso’s decision to work on the Death Star, and have a conversation about what he should have done. Gone to a labor camp and let someone else build it with a better reactor core? What if that someone else had put more shielding over the thermal exhaust ports? (Speaking of which, don’t miss “The Death Star Architect Speaks Out,” and perhaps even my commentary, “Governance Lessons from the Death Star Architect.” I think the governance questions are even more interesting now, if the Empire were to conduct a blameless post mortem, but we know they don’t.) We can use that decision to talk, abstractly, about taking a job in the Trump Administration with less of the horrible emotional weight that that carries.

That mirror on the world is what great science fiction offers us, and that’s what makes Rouge One the best Star Wars yet.

2 comments on "Rogue One: The Best Star Wars Yet?"