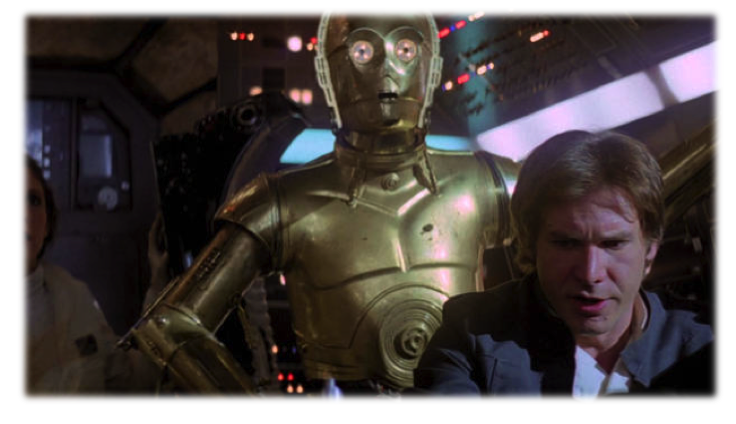 C-3PO: Sir, the possibility of successfully navigating an asteroid field is approximately 3,720 to 1.

I was planning to start this with a C-3PO quote, and then move to a discussion of risk and risk taking. But I had forgotten just how rich a vein George Lucas tapped into with 3PO’s lines in The Empire Strikes Back. So I’m going to talk about his performance prior to being encouraged to find a non-front-line role with the Rebellion.

In case you need a refresher on the plot, having just about run out of options, Han Solo decides to take the known, high risk of flying into an asteroid field. When he does, 3PO interrupts to provide absolutely useless information. There’s nothing about how to mitigate the risk (except surrendering to the Empire). There’s nothing about alternatives. Then 3PO pipes up to inform people that he was previously wrong:

C-3PO: Artoo says that the chances of survival are 725 to 1. Actually Artoo has been known to make mistakes… from time to time… Oh dear…

I have to ask: How useless is that? “My first estimate was off by a factor of 5, you should trust this new one?”

C-3PO: I really don’t see how that is going to help! Surrender is a perfectly acceptable alternative in extreme circumstances! The Empire may be gracious enough to… [Han signals to Leia, who shuts 3PO down.]

Most of the time, being shut down in a meeting isn’t this extreme. But there’s a point in a discussion, especially in high-pressure situations, where the best contribution is silence. There’s a point at which talking about the wrong thing at the wrong time can cost credibility that you’d need later. And while the echo in the dialogue is for comic effect, the response certainly contains a lesson for us all:

C-3PO: The odds of successfully surviving an attack on an Imperial Star Destroyer are approximately…

And the eventual outcome:

C-3PO: Sir, If I may venture an opinion…

Han Solo: I’m not really interested in your opinion 3PO.

Does C-3PO resemble any CSOs you know? Any meetings you’ve been in? Successful business people are excellent at thinking about risk. Everything from launching a business to hiring employees to launching a new product line involves risk tradeoffs. The good business people either balance those risks well, or they transfer them away in some way (ideally, ethically). What they don’t want or need is some squeaky-voiced robot telling them that they don’t understand risk.

So don’t be C-3PO. Provide useful input at useful times, with useful options.

Originally appeared in Dark Reading, “Security Lessons from C-3PO, Former CSO of the Millennium Falcon,” as part of a series I’m doing there, “security lessons from..”. So far in the series, lessons from: my car mechanic, my doctor, The Gluten Lie, and my stock broker.