One of the most interesting security books I’ve read in a while barely mentions computers or security. The book is Petroski’s The Evolution of Useful Things. 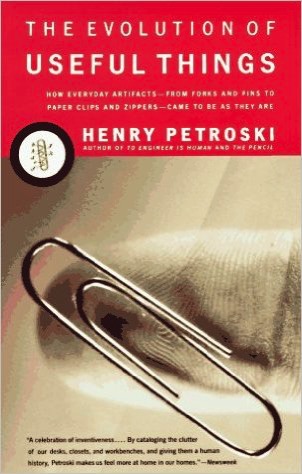 As the subtitle explains, the book discusses “How Everyday Artifacts – From Forks and Pins to Paper Clips and Zippers – Came to be as They are.”

The chapter on the fork is a fine example of the construction of the book.. The book traces its evolution from a two-tined tool useful for holding meat as it was cut to the 4 tines we have today. Petroski documents the many variants of forks which were created, and how each was created with reference to the perceived failings of previous designs. The first designs were useful for holding meat as you cut it, before transferring it to your mouth with the knife. Later designs were unable to hold peas, extract an oyster, cut pastry, or meet a variety of other goals that diners had. Those goals acted as evolutionary pressures, and drove innovators to create new forms of the fork.

Not speaking of the fork, but rather of newer devices, Petroski writes:

Why designers do not get things right the first time may be more understandable than excusable. Whether electronics designers pay less attention to how their devices will be operated, or whether their familiarity with the electronic guts of their own little monsters hardens them against these monsters’ facial expressions, there is a consensus among consumers and reflective critics like Donald Norman, who has characterized “usable design” as the “next competitive frontier,” that things seldom live up to their promise. Norman states flatly, “Warning labels and large instruction manuals are signs of failures, attempts to patch up problems that should have been avoided by proper design in the first place.” He is correct, of course, but how is it that designers have, almost to a person, been so myopic?

So what does this have to do with security?

Its a matter of the pressures brought to bear on the designs of even what (we now see) as the very simplest technologies. It’s about the constant imperfection of products, and how engineering is a response to perceived imperfections. It’s about the chaotic real world from which progress emerges. In a sense, products are never perfected, but express tradeoffs between many pressures, like manufacturing techniques, available materials, and fashion in both superficial and deep ways.

In security, we ask for perfection against an ill-defined and ever-growing list of hard-to-understand properties, such as “double-free safety.”

Computer security is in a process of moving from expressing “security” to expressing more precise goals, and the evolution of useful tools for finding, naming, and discussing vulnerabilities will help us express what we want in secure software.

The various manifestations of failure, as have been articulated in case studies throughout this book, provide the conceptual underpinning for understanding the evolving form of artifacts and the fabric of technology into which they are inextricably woven. It is clearly the perception of failure in existing technology that drives inventors, designers, and engineers to modify what others may find perfectly adequate, or at least usable. What constitutes failure and what improvement is not totally objective, for in the final analysis a considerable list of criteria, ranging from the functional to the aesthetic, from the economic to the moral, can come into play. Nevertheless, each criterion must be judged in a context of failure, which, though perhaps much easier than success to quantify, will always retain an aspect of subjectivity. The spectrum of subjectivity may appear to narrow to a band of objectivity within the confines of disciplinary discussion, but when a diversity of individuals and groups comes together to discuss criteria of success and failure, consensus can be an elusive state.

Even if you’ve previously read it, re-reading it from a infosec perspective is worthwhile. Highly recommended.

[As I was writing this, Ben Hughes wrote a closely related post on the practical importance of tradeoffs, “A Dockery of a Sham.”]