So as Facebook continues to trade at a little over half of their market capitalization of 3 months ago, I think we can learn a few very interesting things. My goal here is not to pick on Facebook, but rather to see what we can take away and perhaps apply elsewhere. I think there are three key lessons that we can take away:

Let me start with the “Privacy Invasion Gonmes.” The short form of their strategy is:

This is, of course, a refinement of the original Gnome Strategy. But what Facebook shows us is:

Gathering lots of data on people is a popular business strategy. It underlies a lot of the advertising that powers breathless reporting on the latest philosophical treatise by Kim Kardashian or Paris Hilton.

But what Facebook shows us is that just gathering data on people is actually insufficient as a business strategy, because knowing that someone is a a Democrat or Republican just isn’t that valuable. It’s hard to capitalize on knowing that a user is Catholic or Mormon or Sikh. There’s a limit to how much money you make being able to identify gays who are still in the closet.

All of which means that the security industry’s love affair with “identity” is overblown. In fact, I’m going to argue that intent beats identity every time you can get it, and you can get it if you…keep your eye on the ball.

The idea that if you know someone, you can sell them what they need is a powerful and intuitive one. We all love the place where everyone knows your name. The hope that you can translate it into an algorithm to make it scale is an easy hope to develop.

But many of the businesses that are raking in money hand-over foot on the internet aren’t doing that. Rather, they’re focused on what you want right now. Google is all about that search box. And they turn your intent, as revealed by your search, into ads that are relevant.

Sure, there’s some history now, but fundamentally, there’s a set of searches (like “asbestos” and “car insurance”) that are like kittens thrown to rabid wolves. And each of those wolves will pay to get you an ad. Similarly, Amazon may or may not care who you are when they get you to buy things. Your search is about as direct a statement of intent as it gets.

Let me put it another way: 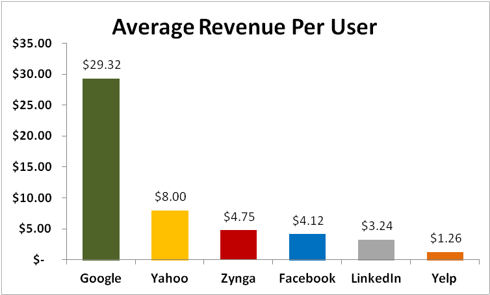 So let me point out that two of these companies, Facebook and LinkedIn, have great, self-reinforcing identity models. Both use social pressure to drive self-representation on the site to match self-representation in various social situations. That’s pretty close to the definition of identity. (In any event, it’s a lot closer than anyone who talks about “identity issuance” can get.) And both make about 1/9th of what Google does on intent.

Generally in security, we use identification because it’s easier than intent, but what counts is intent. If a fraudster is logging into Alice’s account, and not moving money, security doesn’t notice or care (leaving privacy aside). If Alice’s husband Bob logs in as Alice, that’s a failure of identity. Security may or may not care. If things are all lovey-dovey, it may be fine, but if Bob is planning a divorce, or paying off his mistress, then it’s a problem. Intent beats identity.

Maximizing your IPO returns may be a short term strategy

The final lesson is from Don Dodge, “How Facebook maximized the IPO proceeds, but botched the process.” His argument is a lot stronger than the finger-pointing in “The Man Behind Facebook’s I.P.O. Debacle“. I don’t have a lot to add to Don’s point, which he makes in detail, so you should go read his piece. The very short form is that by pricing as high as they did, they made money (oodles of it) on the IPO, and that was a pretty short-term strategy.

Now, if Facebook found a good way to get intent-centered, and started making money on that, botching the IPO process would matter a lot less. But that’s not what they’re doing. The latest silliness is using your mobile number and email to help merchants find you on the site. That program represents a triumph of identity thinking over intent thinking. People give their mobile numbers to Facebook to help secure their account. Facebook then violates that intent to use the data for marketing.

So, I think that’s what we can learn from the Facebook stock slide. There may well be other lessons in an event this big, and I’d love to hear your thoughts on what they might be.