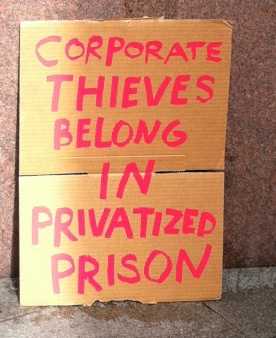 I headed down to Occupy Seattle before a recent vacation, and have been mulling a bit on what I saw, because the lack of a coherent message or leadership or press make it easy to project our own opinions or simply mis-understand what the “Occupy” protests mean, and I wanted to avoid making that mistake. I think I saw two big themes there: an anti-war theme, and a combination of anti-capitalism and anti-corporatism. I think the second is more interesting, because it’s a combination of views, some of which I support, and others I think are somewhat foolish.

I think capitalism is a good thing. I’ve taken a salary from (venture) capitalists who were able to pay me because they captured “surplus value” from startups, and ploughed some of that profit back into more startups. I use the Marixst term of “surplus value” because I understand the Marxist critique, have lived it, and still think it’s a better system than all those others that have been tried from time to time. (I also think that Marx’s critique of capitalism is excellent, and even more so in light of the poorness of his suggested fixes.) The accumulation of capital in private hands greatly expands the range of entrepreneurship, allowing new products and services to emerge. And for those new products to succeed, they need to serve needs better than what preceded them. So we all benefit to a degree from the capital that accumulates in the hands of investors (even with the costs of creative destruction and externalities.)

At the same time, I think that there’s an emergent system of what we might call corporatism that I think is incompatible with a free society, and is in fact incompatible with free markets. By a free market, I mean one in which people contract with each other and with companies, and the court system enforces fair and predictable limits on those contracts. Fair limits might include that the parties came to a genuine meeting of the minds before exchanging value, that contracts are severable (so no indentured servitude or slavery), that interpretation favors the party that received the contract (rather than the drafter), and that neither party engaged in deceit in advertising their services.

Corporatism, at its heart, involves twisting the free market via government intervention in a number of ways:

Corporatism comes from the discovery that rules and meta-rules (the rules that are used to set the rules) are manipulatable. Of course, this is nothing new:

“People of the same trade seldom meet together, even for merriment and diversion, but the conversation ends in a conspiracy against the public, or in some contrivance to raise prices. It is impossible indeed to prevent such meetings, by any law which either could be executed, or would be consistent with liberty and justice.” (Smith, “The Wealth of Nations.”

There were a good number of frankly anti-capitalist signs and groups at Occupy Seattle. It’s a free country, they’re entitled to their opinion, and I can disagree.

But they were not the only signs. I saw lots of signs which seemed to take aim at the unaccountable: the bankers, the corporations (“I won’t believe that corporations are people until Texas executes one”). And I think that responses to currently unaccountable corporatism is going to be one of the key outcomes of the Occupy Movement.