There’s a story in the New York Times, “To Get In, Push Buttons, or Maybe Swipe a Magnet” which makes interesting allusions to the meaning of fair trade in locks, implied warranties and the need for empiricism in security:

In court filings, Kaba argued that it had “never advertised or warranted in any way that any of its access control products are impenetrable.” Locksmiths learn techniques to defeat all kinds of locks, and “thieves and others who want to defeat locks can obtain the same tools and learn the same techniques locksmiths use,” the filings said. “Indeed, any thief — even the most clumsy — can use a sledgehammer, a pry bar or bolt cutter to bypass essentially any lock.”

In a statement, Mr. Miller added that the company had “never received any confirmed report of a break-in” because of a magnetic bypass, and that it heard about the potential for magnetic mischief only in August 2010. Kaba is preparing a free kit to modify the locks and make them magnet-proof, he said.

All of which is really an excuse to share with you this picture. I have no idea if it’s a Kaba lock or not, and I’m reasonably confident that the sign is not Kaba’s fault. 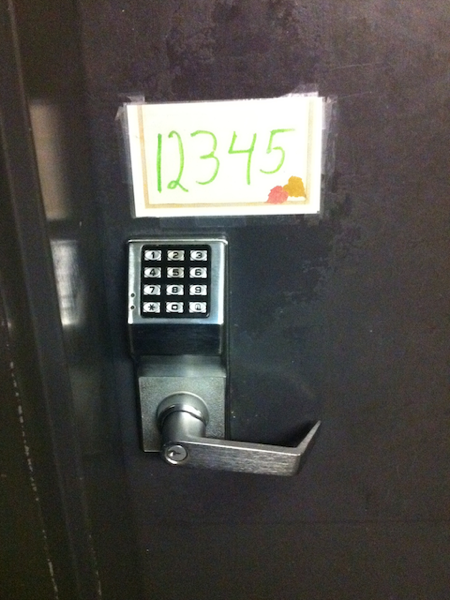 2 comments on "What's the PIN, Kenneth?"