Back in September, a group of Czech artists called EPOS 257 camouflaged themselves as city-workers, went to the Palackeho square in Prague and installed a fence. The fence was left on the square with no apparent intent or explanation.

At first, the city council didn’t know about it, and when there were told, they didn’t know how to deal with it – what if somebody put it there for a reason?

The fence stayed for 54 days before being removed.

It’s amazing how encrusted our nominally public spaces have become, and sad to see that it’s not just the US that suffers from this. 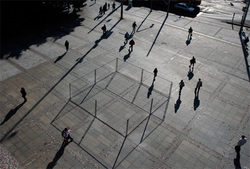