The last week and a bit has been bad to Facebook. It’s hard to recall what it was that triggered the avalanche of stories. Maybe it was the flower diagram we mentioned. Maybe it was the New York Times interactive graphic of just how complex it is to set privacy settings on Facebook: 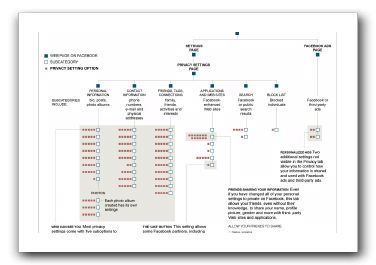 Maybe it was Zuckerberg calling people who trust him “dumb fucks,” or the irony of him telling a journalist that “Having two identities for yourself is an example of a lack of integrity.” Or maybe it was the irony that telling people you believe in privacy while calling them dumb fucks is, really, a better example of a lack of integrity than having two identities.

Maybe it was the Facebook search (try ‘my dui’), or Facebook: The privatization of our Privates and Life in the Company Town. Maybe it was getting on CNN that helped propel it.

It all generated some great discussion like danah boyd’s Facebook and “radical transparency” (a rant). It also generated some not so great ideas like “Poisoning The Well – A Response To Privacy Concerns… ” and “How to protect your privacy from Facebook.” These are differently wrong, and I’ll address them one at a time. First, poisoning the well. I’m a big fan of poisoning the wells of mandatory data collectors. But the goal of Facebook is to connect and share. If you have to poison the data you’re trying to share with your friends, the service is fundamentally broken. Similarly, if you’re so scared of their implicit data collection that you use a different web browser to visit their site, and you only post information you’re willing to see made public, you might as well use more appropriate and specialized sites like Flickr, LinkedIn, Okcupid, Twitter or XBox Live. (I think that covers all the main ways people use Facebook.)

But Facebook’s problems aren’t unique. We’ve heard them before, with sites like Friendster, MySpace, Tribe and Orkut. All followed the same curve of rise, pollution and fall that Facebook is going to follow. It’s inevitable and inherent in the attempt to create a centralized technical implementation of all the myriad ways in which human beings communicate.

I think there are at least four key traps for every single-operator, all-purpose social network.

So I’m shocked, shocked to discover that Facebook is screwed up. A lot of other shocked people are donating to Diaspora ($172,000 of their $10,000 has been pledged. There’s interesting game theory about commitment, delivery on those pledges, and should they just raise a professional round of VC, but this post is already long.) There’s also Appleseed: A Privacy-Centric Facebook Slayer With Working Code.

Now, before I close, I do want to say that I see some of this as self-inflicted, but the underlying arc doesn’t rely on Zuckerberg. It’s not about the folks who work for Zuckerberg, who, for all I know are the smartest, nicest, best looking folks anywhere. It’s about the fundamental model of centralized, all-purpose social networks being broken.

To sum it all up, I’m gonna hand the microphone to Rick:

If you don’t get off that site, you’ll regret it. Maybe not today, maybe not tomorrow, but soon and for the rest of your life. Last night we said a great many things. You said I was to do the thinking for both of us. Well, I’ve done a lot of it since then, and it all adds up to one thing: you’re getting off that Facebook. Now, you’ve got to listen to me! You have any idea what you’d have to look forward to if you stayed here? Nine chances out of ten, we’d both wind up with our privacy in ruins. Isn’t that true, Louie?