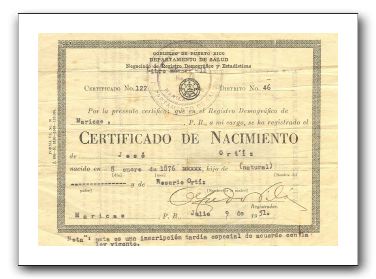 Apparently, the government of Puerto Rico has stolen the identities of something between 1.7 and 4.1 million people

Native Puerto Ricans living outside the island territory are reacting with surprise and confusion after learning their birth certificates will become no good this summer.

If I’m parsing that right, all 4.1 million identities were stolen from their legitimate holders, and 1/3 of those are outside Puerto Rico, leading to an unclear level of actual effort to get the documents replaced.

Now, some people may take umbrage at my claim that this is identity theft. You might reasonably think that fraud by impersonation requires impersonation. But the reason that it’s called identity theft is that the victim loses control of their identity. False claims are tired to their name, ssn, birth certificate, etc. Those claims show up at random. Their sense that they have “a good name” is diminished and assaulted.

You might also claim that I’m exaggerating, but I’m not the one who titled the article “shock.” People are feeling shocked, confused and assaulted by this action.

So despite the not for profit nature of the crime, this is identity theft on the largest scale I’ve heard about in years.

Image from the Oritz family showcase.