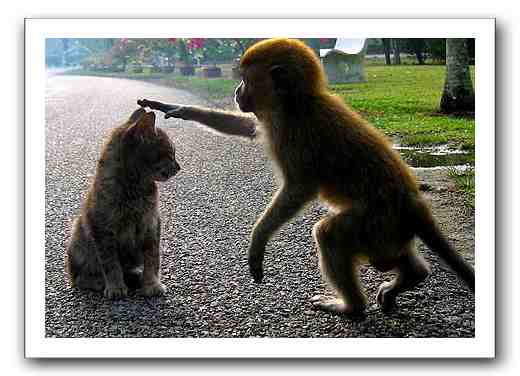 According to “Campbell’s Monkeys Use Affixation to Alter Call Meaning:”

We found that male alarm calls are composed of an acoustically variable stem, which can be followed by an acoustically invariable suffix. Using long-term observations and predator simulation experiments, we show that suffixation in this species functions to broaden the calls’ meaning by transforming a highly specific eagle alarm to a general arboreal disturbance call or by transforming a highly specific leopard alarm call to a general alert call. We concluded that, when referring to specific external events, non-human primates can generate meaningful acoustic variation during call production that is functionally equivalent to suffixation in human language.

Sorta via Wired, who, not being monkeys, did not use the invariable suffix “here’s a link.”