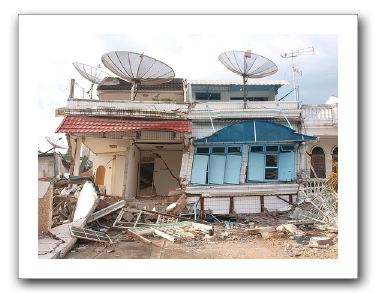 A government minister has blamed Indonesia’s recent string of natural disasters on people’s immorality. Communication and Information Minister Tifatul Sembiring said that there were many television programmes that destroyed morals. Therefore, the minister said, natural disasters would continue to occur.

His comments came as he addressed a prayer meeting on Friday in Padang, Sumatra, which was hit by a powerful earthquake in late September. He also hit out at rising decadence – proven, he said, by the availability of Indonesia-made pornographic DVDs in local markets – and called for tougher laws.

Now, you might think I’m just being snarky, but the opportunities that are open to a communication and information minister include communicating about earthquake or tidal wave safety, or how to cope afterwards. If Sembring is sharing his bizzaro ideas that a lack of morals causes people’s homes to collapse, then he is clearly putting his energy into the wrong message. He should be encouraging people to learn first aid, to have a small disaster kit, etc.

But to the extent that he’s delivering morality over engineering, preparedness, and response, he’s turning natural events into worse disasters.

Earthquake photo part of the Padang earthquake set by dapiiiiit