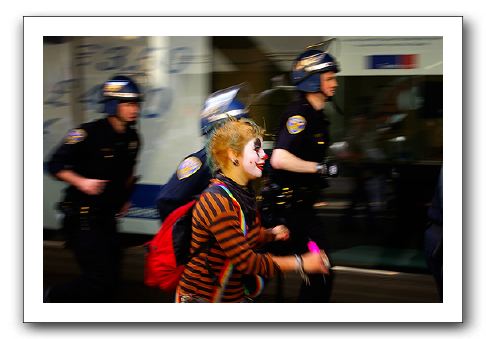 In a lawsuit filed Sept. 28 in Los Angeles Superior Court, Amber Duick claims she had difficulty eating, sleeping and going to work during March and April of last year after she received e-mails for five days from a fictitious man called Sebastian Bowler, from England, who said he was on the run from the law, knew her and where she lived, and was coming to her home to hide from the police.

There was even a fictitious MySpace page reportedly created for Bowler.

Although Bowler did not have Duick’s current address, he sent her links to his My Space page as well as links to video clips of him causing trouble all over the country on his way to her former house in Los Angeles, according to the lawsuit.

“Amber mate! Coming 2 Los Angeles. Gonna lay low at your place for a bit till it all blows over,” the man wrote in one e-mail….

It turns out the prank was actually part of a marketing effort executed by the Los Angeles division of global marketing agency Saatchi & Saatchi, which created the campaign to promote the Toyota Matrix, a new model launched in 2008. …Tepper, Duick’s attorney, said he discussed the campaign with Toyota’s attorneys earlier this year, and they said the “opting in” Harp referred to was done when Duick’s friend e-mailed her a “personality test” that contained a link to an “indecipherable” written statement that Toyota used as a form of consent from Duick….(“Woman Sues Toyota Over ‘Terrifying’ Prank,” ABC News.)

Dear Toyota attorneys: a contract involves, first and foremost, a meeting of the minds. We’ve had years of farcical and indecipherable privacy policies. Anyone who’s ever tried to read them knows that you can’t figure them out. Everyone knows that no one even tries. The final thing which any first year law student knows: neither of those lead to terms which shock the conscience.

I’d like to ask readers to blog and tweet about this until Saatchi, Saatchi and Toyota explain what went wrong, and agree to all of Duick’s demands.

Shown, Toyota’s attorneys in conference with representatives of Saatchi and Saatchi. Photo by Jrbrubaker.