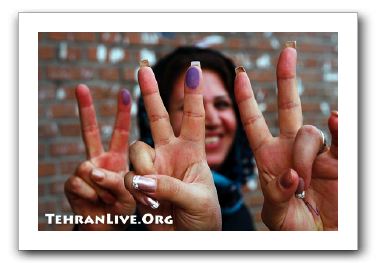 Millions of people in Iran are in the streets, protesting a stolen election. Nate Silver, who did a great job on US election statistics has this:

However, given the absolutely bizarre figures that have been given for several provinces, given qualitative knowledge – for example, that Mahdi Karroubi earned almost negligible vote totals in his native Lorestan and neighboring Khuzestan, which he won in 2005 with 55.5% and 36.7% respectively – there is room for a much closer look.

Nate is a big fan of data, and posted the official election results.

What’s most interesting to me is the role of power and chaos in the midst of this. The first use of power, Ahmadinejad’s theft of the election, was a classical use of power by the leviathan to exert control. The responses of the world’s hyper-power is deeply constrained by history. In 1953, the CIA overthrew the elected Prime Minister, Mohammed Mossadeq, a fact well known to Iranians. If the US acts improperly or throws power around, it will de-legitimitize whatever result comes. The sheer extent of power that the US has makes it hard to use without looking like a bully.

In the meantime, in the chaotic world of everyone a publisher, opposition is forming, organizing, and changing the face of Iran. It’s hard to know how it will all turn out.

Twitter is being used to cover the election and protests and the rate of posts is staggering. It’s worth a few minutes just to see the pace of use of the #iranelection tag. (Compare the pace to whatever happens to be in second place by looking at how many seconds of posts are between the first and last on the page.) Iranians on Twitter during the june clashes. A moving Flickr slideshow is here. There’s also a tremendous amount TehranLive.org. In the more traditional media, Andrew Sullivan is doing as good a job as the New York Times capturing the English language end of it. Both add some context and history, as does Wikipedia’s Iran presidential elections 2009 article. Neither capture the sheer energy and pace of on the ground reporting.

5 comments on "Chaos in Iran"