As you probably know by now, the pattern of 1s and 0s on the cover of the 2009 Verizon Data Breach Investigations Report contains a hidden message. I decided to give it a whirl and eventually figured it out. No doubt plenty of people managed to beat me to it, as evidenced by the fact that I didn’t get my solution in early enough to win the cash prize — but so far, I haven’t seen anybody write up a walkthrough, so I thought I’d do one. (Chris Eng, “Decoding the Verizon DBIR 2009 Cover“) 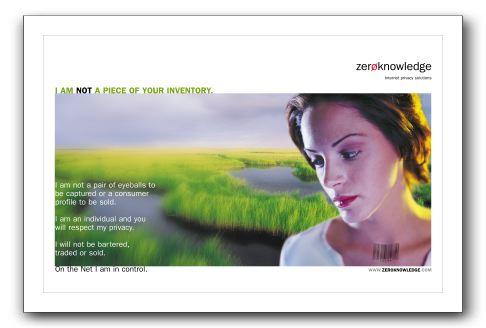 This reminds me a lot of the posters we did at Zero-Knowledge. I’m not sure who came up with the idea, but we decided to encode a secret message in the bar codes. It was pretty tricky. We didn’t have the hundreds of bytes that Verizon had on their cover, we had 8 bytes per barcode, meaning we had no more than 40 characters in which to encode a message.

I remember a brainstorming session at a nearby bar (le Cheval Blanc?). We wanted something meaningful. We wanted something relating to privacy, anonymity and freedom. Something evocative and memorable. We kept running into that 40 character limit. The ads were expensive to produce, and we had already decided that we only wanted five, so that there would be recognition and people would see them repeatedly in Fast Company and Wired.

I don’t remember who came up with “Who is John Galt” as the slogan. We had bounced around some 1984 references (too negative), but kept hitting that limit. When we decided we needed to get them out, we settled on the Ayn Rand reference, and Ian Goldberg encoded them as bar codes. He just happened to have some bar code fonts sitting around.

Even with those constraints, it was a lot of fun tossing ideas around and seeing them in print all over the place.

Like Verizon, we hinted at there being something there to get people to look. Maybe one of these days someone will manage to keep it a secret for a while, and get a second wave of publicity out of their secret messages.

Anyway, I had fun reminiscing about the posters. Thanks to Austin Hill and Jean Bernard for hooking me up with high quality images of the posters.