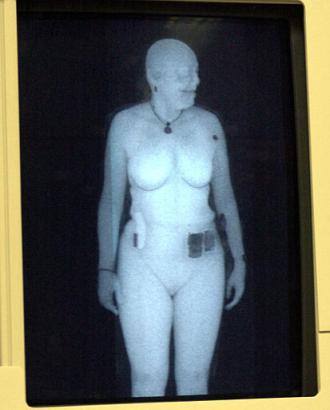 Congressman Jason Chaffetz has introduced legislation seeking a ban on Whole-Body Imaging machines installed by the Transportation Security Administration in various airports across America. Describing the method as unnecessary to securing an airplane, Congressman Chaffetz stated that the new law was to “balance the dual virtues of safety and privacy.” The TSA recently announced plans to make the scanners, which capture a detailed picture of travelers stripped naked, the default screening device at all airport security checkpoints. Whole Body imaging (Backscatter X-Ray) technology was introduced as a tool for screening some air travelers.

Read “Congressman Seeks End of Whole Body Imaging at Airports” for the links.

These scanners won’t make us more secure. Our wallets and our dignity can’t afford these scanners. Kudos to Congressman Chaffetz.

As an aside, searching for this image (which we’ve used before) required turning off Google’s “SafeSearch.” If Google won’t show that image, why should you be forced to pose for it?

Previously: “TSA to Look Through Your Clothes” and “TSA Violates Your Privacy, Ties themselves in Little Knot of Lies”