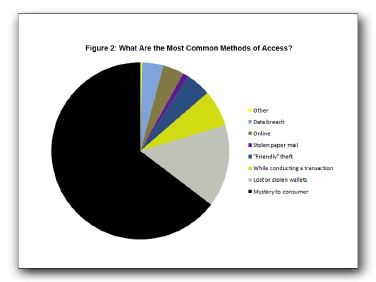 In 2008, the number of identity theft cases jumped 22 percent to 9.9 million, according to a study released Monday by Javelin Strategy & Research. The good news is that the cost per incident — including unrecovered losses and legal fees — fell 31 percent to $496.

Javelin, unfortunately, does work with confidential numbers, so we can’t reproduce or analyze their results.

So we can’t tell if this undercuts the idea that breach disclosure laws don’t work. We can tell that the common reporting is wrong, as Kevin Poulsen demonstrates in “Stolen Wallets, Not Hacks, Cause the Most ID Theft? Debunked.”