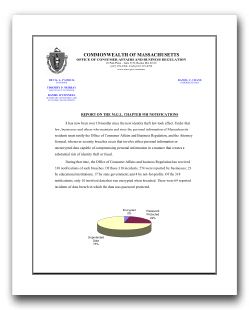 In “Report On The M.G.L. Chapter 93H Notifications,” the Office of Consumer Affairs analyzes the breach notices which have come in. The report is a lot shorter than the “Maine Breach Study,” coming in at a mere four pages.

There are many interesting bits in those four pages, but the two that really jumped out at me are:

What’s exciting about this is that we’re seeing the PCI standard being tested against empirical data about its effectiveness. Admittedly, the report jumps to conclusions from a single data point, but this is new for security. The idea that we can take a set of “best practices” and subject them to a real test is new. It might, if you’ll forgive me, even be New School.